1. The Growth of Mixed-use 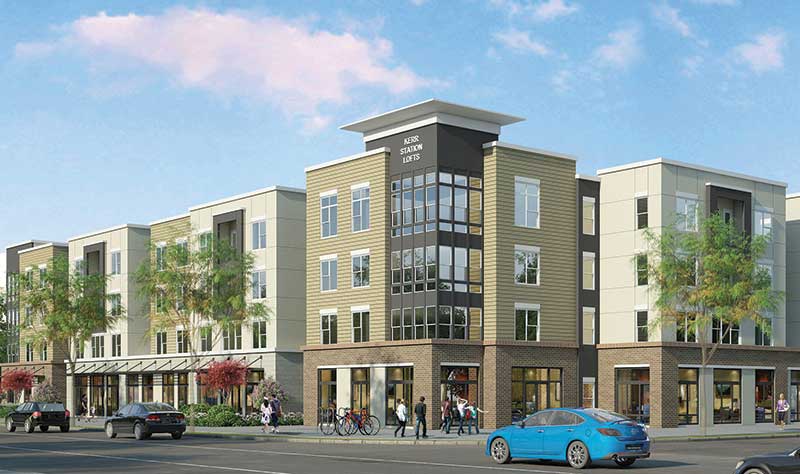 The term “mixed-use” has become a familiar phrase in Wilmington conversations as an ideal development method or redevelopment where appropriate.

Most high-profile projects have the mixed-use label, including Mayfaire Town Center, where residents live above retail spaces. The next generation of major mixed-use projects is planned along the same corridor where Mayfaire has a mix of residents, shoppers, diners and office workers. The newly proposed projects include CenterPoint, The Avenue and Arboretum West and Arboretum Village. One smaller example is Kerr Station Lofts (rendering at right ) on South Kerr Avenue, which will include apartments, townhomes and commercial space.

When he couldn’t find an appropriate space in downtown Wilmington for a building he was planning, businessman Yu Hang Wang set his sights on the Leland area, where there’s a noticeable uptick in commercial development.

“It is one of the faster-growing areas in North Carolina, especially in the past five years. Everything’s kind of started exploding over here,” said Wang, owner of Hibachi Bistro locations in Wilmington, Kinston, Greenville, and soon, Leland.

His development, Ocean Gate Plaza, is an 11,163-square-foot building next to the Walmart shopping center on U.S. 17.

Wang’s project is just one example of a number of developments coming online in the Brunswick County town. 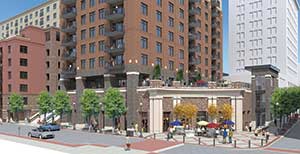 Examples abound of redevelopment projects in the city of Wilmington, where vacant land is scarce. Notable examples include River Place (left ), a 13-story structure with luxury condos, apartments and retail space that will be built at 200 N. Water St. downtown, expected to be finished in 2020, and Independence Mall, 3500 Oleander Drive, where new owners intend to overhaul the property.

Independence Mall has been renamed The Collection at Independence. The company that purchased much of the mall, Rouse Properties, plans to remove sections of the mall’s interior, demolish the Sears store and add residential units, a hotel and a medical office building.

While downtown Wilmington has been the setting for the most recent high-profile hotel projects, including an Embassy Suites by Hilton Wilmington Riverfront connected to the Wilmington Convention Center, more are planned.

An Aloft Hotel is under development by Poteat Hospitality at the Coastline Conference and Event Center on Nutt Street.

And Clarendon Properties is working on bringing a hotel to Porters Neck, an area that doesn’t currently have one.

“We have a real shortage here. Anything from 10,000 to 25,000 square feet, we just don’t have it. There’s very little of it sitting out there available,” Grayson Powell, managing partner of Wilmington based Coldwell Banker Commercial SunCoast, said of local industrial space.

Nationally, “merchandisers looking to get something to you in the same day, they need to have a distribution channel closer to the consumers. That’s why there’s such tremendous demand for industrial right now,” said Fred Schmidt, president and chief operating officer of Coldwell Banker Commercial Affiliates.

While some commercial real estate projects call for local businesses, other developers are working on bringing in more national and regional tenants to the Wilmington area.

For example, for the first time, a Chick-fil-A is on the way to Leland Town Center, while another is planned in Porters Neck.

When it comes to the grocery sector of retail, the Cape Fear region has successfully courted new brands.

The northernmost county in the Cape Fear region’s tri-county area is expected to see more growth in the coming years, and with that growth will come greater interest by commercial prospects, brokers say.

Pender Commerce Park in Currie is attracting new tenants and new retail is expected in Hampstead.

Bigger is not better for some retailers these days, brokers and developers say. Some larger shopping center spaces, such as a former Roses department store at Ogden Plaza, are being broken up to accommodate more than one tenant.

In general, said Nicholas Silivanch, of Eastern Carolinas Commercial Real Estate, there’s a lot of interest in smaller spaces, especially for restaurants between 1,200 and 2,400 square feet. He said ECCRE is working on some space reductions to bring more tenants to small shop space at vacated junior box stores, including a former Dollar General at Leland Plaza. 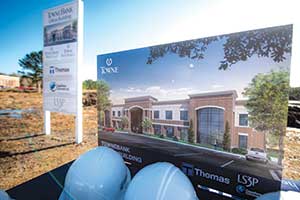 The demand for office space is strong throughout Wilmington.

Some examples: The fifth and sixth buildings in The Offices at Mayfaire series are under construction behind Mayfaire Community Center.

And crews broke ground in January on the TowneBank Building, a Cape Fear Commercial project. Meanwhile, a new series of office buildings is planned off South 17th Street and Independence Boulevard, called The Offices at Barclay.