HEALTH CARE: Growing The Pharma Base 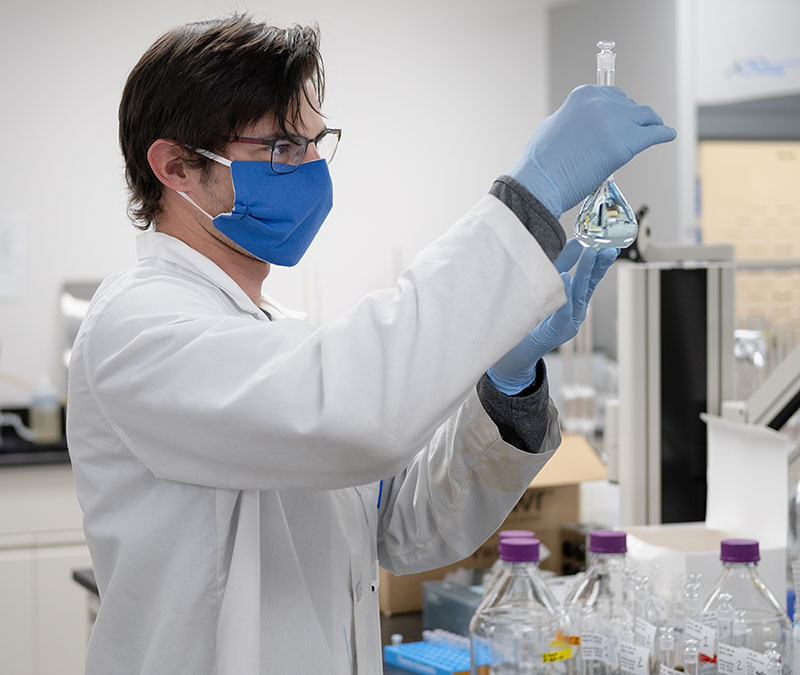 The milestone in PPD’s journey builds on the growth the global contract research organization has experienced since its beginnings as a one-person firm in Maryland in 1985 to setting roots in the Port City the next year and building its name from the hub here for over three decades.

But the advantages of having the firm here go beyond the $110 million investment in its worldwide headquarters downtown or the nearly 1,800 local jobs it provides today.

The seeds planted by Fred Eshelman, founder of PPD, along with other local pioneer firms – aaiPharma, known today as Alcami, and Quality Chemical Laboratories – have helped sow a burgeoning sector in the Cape Fear region, said Randall Johnson, executive director of the N.C. Biotechnology Center Southeastern Office.“I think one of the most impressive things about the cluster is the diversity of companies in our local clinical research community – from small, entrepreneurial ventures to very large multinational corporations and various sizes in between,” Johnson said. “This diversity makes our cluster stronger overall, including helping with our talent attraction and retention in the area because employees have a wide range of choices for employers.”

The contract research organization, or CRO, industry in Wilmington encompasses a variety of companies that conduct clinical trials and provide management and support services for the pharmaceutical industry. A range of other local pharmaceutical firms also helps this cluster in testing and manufacturing. Clinical research is an area of medicine that researches, tests and studies areas such as the safety, effectiveness and side effects of medications, vaccinations and other types of medical treatments.

From the early area firms starting decades, the clinical research cluster has grown to more than 60 companies represented in the region – contract research organizations and contract manufacturing organizations – with about 3,300 people in the workforce, according to a 2019 report by the N.C. Coast Clinical Research Initiative.

There are also support companies and employees that surround the field, as well as about 100 clinical trials ongoing in the area at any given time with medical practices and physicians conducting those trials, Johnson said.

The numbers have grown significantly in recent years and are on an upward trajectory, he said.

And despite the COVID-19 pandemic, many companies are adapting, finding work through coronavirus studies.

Because many employees in the industry can live and work anywhere in the country, a number have chosen Wilmington for its quality of life as well as growing employment opportunities and support services. Johnson said.

The quality-of-life aspect is what brought PPD here.

Eshelman relocated PPD to Wilmington in 1986 and incorporated the firm in North Carolina in 1989.
Since then, the firm has grown to nearly 100 offices in 46 countries with more than 24,000 employees, making PPD one of the largest CROs in the world, current PPD Chairman and CEO David Simmons said. 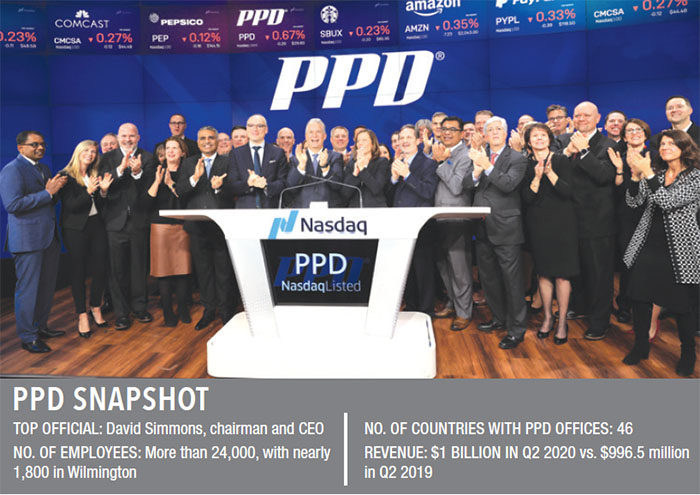 PPD, having started as a consulting firm, is now conducting drug development services for a variety of customers, ranging from pharmaceutical and biotechnology firms to government and academic institutions.

“The IPO helped position us to continue to invest in innovation and differentiating services, from a strong financial foundation, to help our customers provide life-changing therapies and pursue our mission to improve health,” Simmons said recently.

A significant portion of PPD’s history was as a publicly-traded organization. The company filed its first IPO in 1996, later returning to a private company in 2011 when it was acquired by affiliates of investment firms The Carlyle Group and Hellman & Friedman.

Wilmington is one of PPD’s largest locations. It also has another North Carolina office in Morrisville in the Triangle with a similar employment size.

“From our Wilmington headquarters and extending across our global organization, PPD has a long history of leadership in defining the CRO industry and innovating for the future, with the goal of helping customers speed safe and effective medical therapies to improve patient health,” Simmons said.

Besides the IPO, PPD this year has been a player in vaccine studies for the coronavirus and in August signed a new three-year agreement with New York-based pharmaceutical giant Pfizer Inc. to provide drug development services.

“It has been encouraging to see how the rise of Wilmington’s life science community continues to strengthen and diversify the local economy, which we hope will create even more opportunity in the future,” Simmons said.

Another early clinical firm for the area was aaiPharma, which started in Wilmington in 1986.

Just a few years after the firm’s founder Frederick Sancilio retired, the company filed for bankruptcy in 2005.

The firm emerged from bankruptcy, with Sancilio returning for a short stint with the company, which went through several different phases and ownership over the years.

In late 2013, it merged with Cambridge Major Laboratories and later became Alcami Corp. in 2016. The pharmaceutical development, testing and manufacturing firm, which has executive offices in Wilmington and Durham, announced Walt Kaczmarek as its new CEO this year. 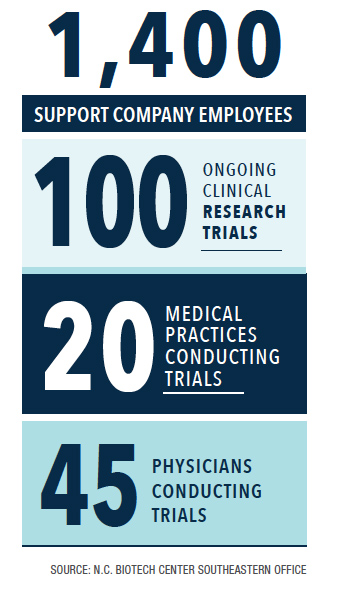 Through these early companies, the area has lured in a significant pool of workers over the years. Some of them have branched out, starting their own entrepreneurial ventures or joining other firms that helped grow the industry’s base, Johnson said.

That was the case for Phil Dattilo, president of Wilmington-based Trial Management Associates LLC, who started in the industry with PPD in 2004 as an analyst and later joined TMA in 2011.

The clinical research management company was started by entrepreneur Danny Gillis in 2010. Dattilo was recruited from PPD to join TMA with a small stake in the company and eventually bought the business in 2014.

TMA is an 18-person firm today with a corporate office and a 5,000-square-foot research facility the firm moved into in August in midtown Wilmington. It also works with four physician sites.

“We will continue to grow in Wilmington. Our successful execution of the ongoing Moderna COVID vaccine trials and our continued success in gastroenterology and dermatology will allow us to win more groundbreaking research trials for the community,” he said. “Clinical trials are seemingly becoming larger and larger in terms of the number of patients required to determine the safety and efficacy of new therapies. Our new space will give us the foundation we need to meet the needs of bigger trials.”

The area’s clinical research footprint grew organically for about 20 years, but intentional focus to build it started around 2006, Johnson said.

N.C. Biotech established its Southeastern office about that time, he said. And the University of North Carolina Wilmington’s School of Nursing has since helped build the clinical research talent pipeline with bachelor’s, master’s and post-baccalaureate certificate programs in clinical research.

The support also includes the FuseCR (Center for Clinical Research Workforce Development) at UNCW, which is a partnership of groups focused on bringing together resources for the clinical research field. In addition, the N.C. Coast Clinical Research Initiative was formed as a partnership between N.C. Biotech, UNCW and local clinical research firms to provide for workforce development opportunities, including education and networking.

The start of Quality Chemical Laboratories in 1998 was a natural evolution, between firm founder Yousry Sayed’s years of teaching and the area’s growing pharmaceutical industry, to help foster the jobs and training students need, Sayed said.

Sayed, president and CEO of the firm, started in the area consulting for pharmaceutical companies and teaching in the late 1970s and 1980s. He also has ties to UNCW.

Today, Quality Chemical Laboratories’ breadth of business in the industry involves initial discovery, analytical studies, sample testing for raw materials and drug products and manufacturing. The firm is also looking to discover and develop new products, manufacturing technologies and drug delivery systems. Innovation has been a key component of Quality Chemical Laboratories in the past 23 years, Sayed said.

“I look at what we have done as kind of a nucleus to what has made Wilmington what it is today for the industry,” Sayed said. “Part of our goal now is to try to basically have some new technologies in the manufacturing side, which will be developed in the next one to five years.

“Also, we’re going to be bringing in manufacturing injectables, or sterile products, which is a very specialized area that requires a lot of technology, a lot of science, a lot of inspections from the FDA, and all that is going to be happening in our new building.”

But building a talent pipeline with the knowledge and skill set needed for the work that Quality Chemical Laboratories does has been one of the company’s biggest challenges, Sayed said. The company has about 250 people today but expects to need an additional 200 to 300 people in the coming years due to growth.

“We’re going to be looking for a lot of people over the next couple of years, and I know it’s going to be a challenge because we need highly technical people and there is a lot of training that goes into taking someone from having a degree to being able to step in the industry and be productive,” Sayed said.

To continue to capitalize on the area, however, Sayed said there’s also a need to expand infrastructure and technologies in Southeastern North Carolina to keep the region’s pharmaceutical sector growing for decades to come.

“I think there is still some room for continued growth. I think we have to be mindful of providing infrastructure and help in attracting new technologies,” Sayed said. “We have a lot of reputation in what we do, what Alcami does, what PPD does, and all the other clinical trial companies … but I feel like there is definitely some room for attracting some technological advances that are still needed in this industry, something that will make this area unique.”