Sound Off: Sparking Waves Of Innovation 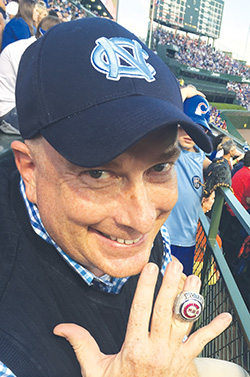 Jim Roberts
In mid-September, I attended the conference of the Southeastern members of the Angel Capital Association in Durham to represent the Wilmington Angels for Local Entrepreneurs (WALE) and to play the role of the fox in the hen house for the entrepreneurs of Wilmington to meet more regional investors.

I had the “luck” of intentionally sitting next to the leaders of the Charleston, South Carolina, ecosystem, which is 10 years ahead of Wilmington.

John Osborne leads the local investor group and also started the entrepreneur development support organization and ecosystem. John started the Harbor Entrepreneur Center and is an executive of the Charleston Angel Partners.

I asked him how Charleston flipped the switch to ignite the funding of startups in what was considered a very conservative region with an older demographic with inherited wealth or wealth made through real estate. Sound familiar?

The first wave of successful entrepreneurs with large returns really succeeded without the help of a formal ecosystem. One of the scaling startups named Blackbaud had an initial pub lic offering on Wall Street for a HUGE return on investment for the founders, investors and employees. Others had acquisitions in the hundreds of millions of dollars.

The second wave of successful entrepreneurs was a direct result of serial entrepreneurs, employees with equity from those first-wave startup exits and of course the returns from those first-wave exits were now reinvested to make more money. There have now been 12 companies in Charleston with exit events of over $50 million that gave investors a great return on investment.

There is now a third wave of entrepreneurs benefiting from the foundation built by the previous two generations of waves of successful entrepreneurs. Due to the prior success of the entrepreneurs in the region, they have given back or are paying it forward to fund much more formal infrastructure in place to find entrepreneurship programming and formal investment vehicles.

Where is Wilmington now?

Well, it is no secret that the Live Oak Bank family of companies is succeeding without the help of an existing entrepreneur ecosystem prior to 2013.

nCino is now a “unicorn” of being valued at over a billion dollars from the last round of funding. The next Live Oak Bank branch of startups includes Apiture with well over 100 employees who are making great salaries in a very nice office environment.

And we are all very aware that NextGlass, now known as Untappd, was listed in 2018 among the fastest-growing privately held companies by the Inc. 5000 listing. When I met NextGlass in 2013, they were basically a father-and son team with a co-founder friend who worked in Charlotte. They have participated more in the local ecosystem and Coastal Corridor between Raleigh and Wilmington with appearances at statewide investor pitch events.

There is now a secondary wave of Wilmington startups that have been very active in the ecosystem built since 2013.

Among those startups that are scaling and hiring include Lapetus Solutions, EasyVote Solutions and Connected Investors.

So as the density of startups grows in Wilmington, those entrepreneurs will need capital as the fuel for growth. The ecosystem is maturing with three-and-a half angel networks and funds.

The Wilmington Investor Network (WIN) is the granddaddy of local angel investor activity. They have educated this market for well over a decade and host events and mentor entrepreneurs at tekMountain.
Wilmington Angels for Local Entrepreneurs (WALE) is a very small group of angels who have made 13 investments since November of 2015 with the region covered by a portfolio of startups in Wilmington, Myrtle Beach and Raleigh/Durham. Six of those startups were founded by military veterans.

VentureSouth is the newest player in Wilmington and is actually part of a 12-city syndication of angel networks in the Carolinas.

The half-network is the IMAF Cape Fear fund. While they have invested all of their funds, they still have an active portfolio of promising regional companies that include Kwipped and Untappd locally. Maybe they will invest again after they harvest the returns from these investments.

The Coastal Corridor is alive and kicking as Network for Entrepreneurs (NEW) has opened Interstate 40 as a two-way street between the assets of Raleigh/Durham and Wilmington.

We have hosted over 60 investors in the past four years at our events at Ironclad Brewery in downtown Wilmington. We have sponsored Wilmington entrepreneurs to buy tickets for them to attend investor-related events in Raleigh/Durham.

Among the other new pieces of the growing infrastructure for entrepreneurs in Wilmington is the new structured mentor program at UNCW CIE. This was funded by the NC IDEA Ecosystem Grant.

Our next event – Oct. 15 at Ironclad Brewery – is themed Mystery Startup Theater where three high profile mentors, instead of the entrepreneurs, will give the value proposition pitch of the local startups to the audience made up of investors and other entrepreneurs.

Please get involved to help us retain the young bright minds in Wilmington.

Jim Roberts is the founder of Network for Entrepreneurs and Wilmington Angels for Local Entrepreneurs. He has worked in entrepreneur development for 19 years in North Carolina.

EDITOR'S NOTE: The Greater Wilmington Business Journal is launching a regular series of op-eds, opinion columns about ideas for sparking economic growth in the region. If you have a column topic to be considered, email [email protected] wilmingtonbiz.com