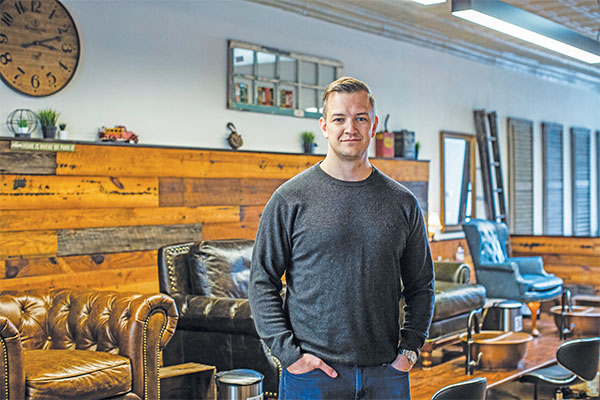 On a weekday near the end of January, James Goodnight planned to travel to Willard, a small unincorporated community in Pender County, after visiting some of his properties in downtown Wilmington.

The reason for the side trip on his way home to Raleigh: Some state officials had asked him if he  might be interested in saving an old Wilmington & Weldon Railroad train depot by moving it from Willard to Raleigh, and Goodnight was seriously considering it, he said, as he showed pictures of the historic structure that were stored on his phone.

It’s not something he’s done before, but the 37-yearold Raleigh native has spent the past several years rehabilitating historic structures in the Port City, including four on Front Street and two on Princess Street.

Although born in the state’s capital city, James has always had ties to Wilmington. His father, SAS CEO and co-founder Jim Goodnight, graduated from New Hanover High School before heading to N.C. State University, where in 1976 he and colleagues planted the seeds of the software firm he still leads. Since then, SAS has grown to employ nearly 14,000 people worldwide and has a revenue of more than $3 billion.

In addition to James, Jim Goodnight and his wife, Ann, have two older daughters. In the 1990s, James Goodnight’s sister Leah founded but later sold Beanie + Cecil, a boutique clothing store in Wilmington.

But although James worked in finance at SAS for a time, he later found a career in saving historical buildings, first in Raleigh and then in Wilmington.

James attended Ravenscroft School in Raleigh before graduating with degrees in history and psychology from the University of North Carolina at Chapel Hill. He was working at SAS a few years after college when he noticed something about his hometown that would be key to his future work.

“I was living there and seeing how quickly things were changing,” he said. “It seemed like a pretty great frontier of real estate.”

His historic rehab career began in Raleigh and includes a former bank building that is home to the award-winning restaurant Death & Taxes, and Anchorlight, an incubator art studio created using an old warehouse.

This year, a Wilmington satellite of Anchorlight opened with an art show in the bottom floor  of 1 S. Front St., one of James’ Wilmington properties.

In Wilmington, his historic redevelopment efforts started with the headquarters of Untappd at 21 S. Front St., a project announced in 2014. Now they include 1 and 9 S. Front St., for which he restored the connection between the two buildings; 10 S. Front St.;222, 226 and 230 Princess St.; and a building at the corner of Third and Castle streets.

Along the way, both in Wilmington and Raleigh, James has used the state’s historic tax credit program to make his projects work. With his developments, he aims to activate downtown streets that might have waned in the past.

For example, the former owner of 230 Princess St. showed James some photos from 1975, “when he had the buildings appraised, and they’re looking down Princess Street, and it was just so desolate,” James said.

He sees rejuvenation along the corridor these days, just as he saw potential, and interesting stories, in downtown's historic structures before he started his projects in Wilmington.

“I took a few history classes (in college) and actually really enjoyed writing the papers. It’s all about storytelling and research and all that,” James said. “It’s kind of the same thing with these old buildings.”