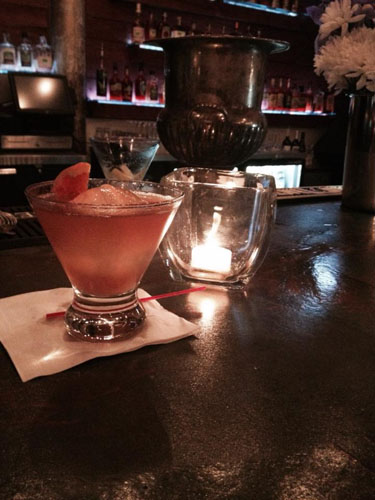 (Photo by Liz Biro)
Downtown Wilmington bar development took a noticeable slant toward mature audiences with the late December opening of a speakeasy-style cocktail lounge and a wine bar.

The Blind Elephant appeared quietly on New Year’s Eve at 21 N. Front St., in the alley between Port City Java and Front Street Brewery. Previously home to a bar named Station 21, the address is hidden, which owner Ashley Tipper says plays into her plan to create a prohibition-era-like cocktail experience.

At The Blind Elephant, a small set of stairs leads to a black, unmarked door that opens into a tall, exposed brick space. A curved bar anchors one side. A large chalkboard high on the wall lists specialty drinks, many with gin and moonshine in a nod to popular 1920s spirits. A private upstairs area that serves as a VIP lounge is named for Andrew Volstead, a key force behind the National Prohibition Act of 1919.

The name of the bar and some drink titles reflect the era, as well. The Blind Elephant name was inspired by prohibition speakeasies often called “The Blind Tiger” or “The Blind Pig.”

“We went with Elephant because, well, elephants are awesome,” Tipper said at the spot’s Facebook page.

Bourbon is a huge part of the scene, Tipper said. The Flapper cocktail blends bourbon, fresh cherry puree, ginger beer and orange bitters. Guests may choose from about 45 bourbons, which are poured on large, single ice balls or cubes when ordered on the rocks, Tipper said. She also plans a “bourbon club.” Members would get a set price on sips and their photo on the wall alongside Prohibition-era legends, scenes and newspaper clippings once they had tried a certain number of bourbons.

An Alabama native, Tipper said she came to Wilmington about two years ago. She said she wanted to live on the southern East Coast and liked Wilmington’s historic areas. She worked as a Little Dipper restaurant server and is a member of Cape Fear Roller Girls roller derby team. Tipper said she opened The Blind Elephant because she thinks the market for nice lounges downtown is underserved.

Miketa agreed with Tipper’s take on the market. At Bella Bar-Local, he said expects to attract couples, downtown workers, groups of friends and anyone looking for a laid-back atmosphere.

Miketa said he purchased the more than 100-year-old building where Bella’s is located in 1999 as an investment property.