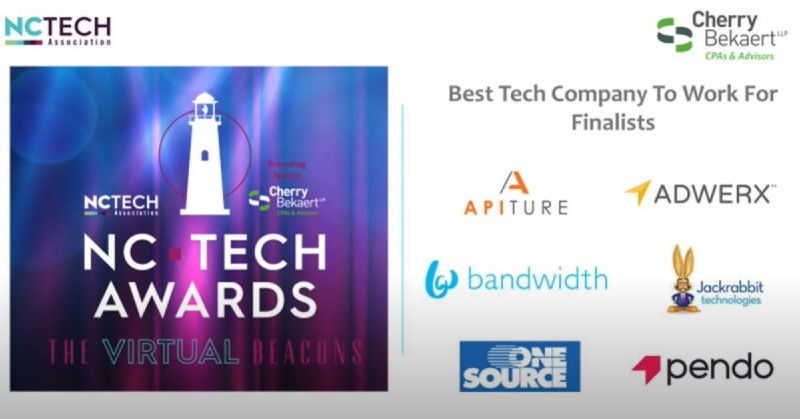 NC TECH Association today announced the finalists of the NC TECH Awards which include Wilmington-based Apiture and OpiAID. (Screenshot of the online announcement)
Two Wilmington companies have been recognized by the N.C. Technology Association as part of its 2020 TECH Awards.

The awards program recognizes companies, organizations and individuals for their achievement, innovation and leadership throughout the year, a press release stated.

“During these uncertain times, innovation and achievement in technology is more important than ever,” Ron Wainwright, partner at Cherry Bekaert, said in the release. “We are consistently impressed by the emerging development and leadership in the technology sector and look forward to celebrating the positive impact these companies have on the state of North Carolina.”

Apiture is a technology firm that supports hundreds of banks and credit unions with digital banking services. It is a joint venture between Live Oak Bank and Atlanta-based First Data. Earlier this year, Apiture raised $20 million, which officials said will help the company accelerate development of financial technologies.

The company appreciates the recognition in the two categories, chief operating officer Chris Cox said in an email.

“These categories represent two primary areas of focus for Apiture, namely delivering software that helps banks and credit unions thrive in today’s market, and being a place where the best-and-brightest can build careers,” Cox said. “We’re proud of the company we’re building in Wilmington, and happy to be part of the vibrant technology scene in North Carolina.”

Previously, Apiture was named by American Banker as one of the best fintechs to work for, coming in at No. 24.

OpiAID is a data science company creating innovative solutions for addiction treatment, according to its website.

The company was founded in 2018 and provides access to interpreted behavioral and health data to Medication-Assisted Treatment rehab centers so they can provide a personalized plan for their patients.

The company also developed a wearable device that would detect cravings and overdoses and deliver naloxone, a medication that can reverse overdose symptoms.

“We have a tremendous team at OpiAID working very hard to help our neighbors struggling with addiction. OpiAID is also very fortunate to have amazing local mentors, partnerships and a great ecosystem in which to grow our company,” said co-founder David Reeser.

Earlier this year, the company won a $276,000 federal grant to support its efforts.

The NC TECH Awards process included a nomination period and finalists and winners were chosen in a two-stage review process, led by an accounting firm and an independent selection committee which included the local groups Wilmington Angels for Local Entrepreneurs and the Center for Innovation and Entrepreneurship at the University of North Carolina Wilmington.

Winners for each category will be announced Nov. 17-19 during three broadcasts beginning at 4 p.m. each day on Saturday, Sunday and Monday.