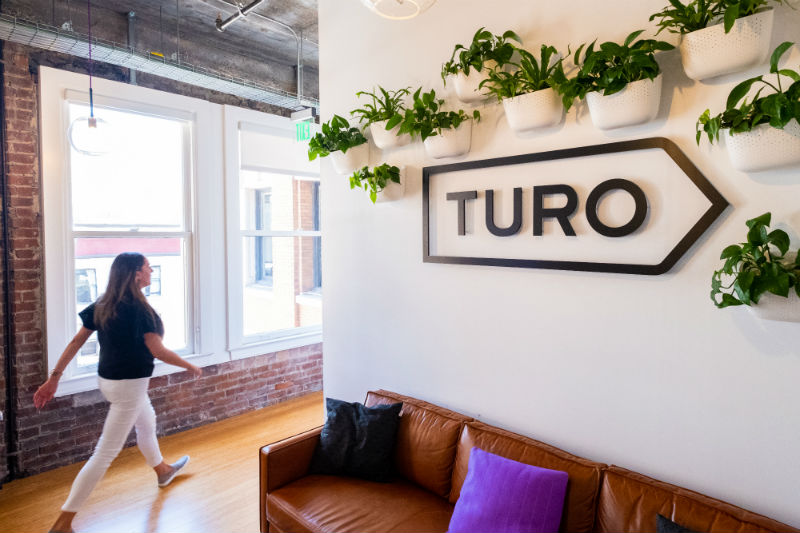 The Wilmington International Airport and Turo reached a permit deal that allows the California-based car-sharing startup's users to operate at the airport. (Photo courtesy of Turo)
The Wilmington International Airport is the first U.S. commercial airport to welcome peer-to-peer car rental startup Turo, allowing Turo users to operate at its premises.

With Turo, car owners can list their car on the Turo app, allowing them to rent out the car for a period of time. Many times, car owners and renters meet at airports, where the car owner turns the car over to the renter and then the owner finds their own transportation home.

Turo officials refer to the company as an “Airbnb for cars.”

“Maybe the hosts’ kids are away at college and so they have an extra car that their kids need to use during winter break and in the summer, but otherwise it's sitting in their driveway. And they're still paying insurance and maintenance costs,” said Michelle Fang, Turo’s chief legal officer. “It’s a way that they can utilize this asset that would otherwise just be sort of a depleting asset.”

ILM was one of many airports Turo reached out to to establish a permit, Fang said.

Under the terms of the one-year permit, the San-Francisco based startup would pay ILM $3 per reservation, with a set minimum payment of $5,000, according to Fang.

“We've committed to the airport that we will remit $5,000, even if the amount of volume at the airport is lower than that,” Fang said. “It's sort of a guarantee for them to go through creating the permit for us.”

While both ILM and Turo have reached a newfound partnership, officials at Enterprise Holdings, the parent company of Enterprise Rent-A-Car, say that peer-to-peer car-sharing companies like Turo should be treated the same as traditional car rental companies.

There is an Enterprise Rent-A-Car office on-site at ILM which currently pays a 10% revenue fee on gross receipts in addition to other fees for things like parking spaces, said Brian Rothery, vice president of government and public affairs at Enterprise Holdings.

There are many factors both Turo officials and Enterprise officials’ reference when it comes to how much they believe peer-to-peer companies should pay to operate at airports.

Two of those include how the business is classified and the impact its presence has on airports.

Turo is a traditional car rental company, according to Enterprise.

“We don't look at it as a platform as much as we look at it as a company who has found a creative way to source cars into an existing marketplace,” Rothery said. “This is a company that is in the car rental business. It's the same business category. The only distinguishing factor is the way in which they have chosen to source their cars. And for the record, we don't have any issue with sourcing their cars in that way. We just simply want acknowledgment that sourcing cars in that way does not result in special treatment.”

Turo officials contend that Turo is a platform for peer-to-peer car-sharing and is more similar to taxis or Uber than to Enterprise.

“We're not the same as a TNC (Transportation Network Company), a taxi or a limo, but when you're looking at what buckets you should compare us to, we think that's the right bucket because of the impact on the airport itself,” Fang said.

When it comes to the impact Turo has on ILM, Fang said it is minimal in comparison to Enterprise.

“Somebody drives on, somebody drives off. It's a pretty quick and pretty seamless transaction. They don't need employees, infrastructure, parking bays, gasoline and repair stalls and things like that,” Fang added.

Turo’s minimal impact on ILM is not accurate, Rothery said.

“It's quite significant when you factor the amount of time it takes for that sort of transaction to take place,” Rothery said. “A peer-to-peer car rental transaction involves making contact with the vehicle owner, introducing oneself, producing a driver's license. Some of the platforms require multiple pictures, as many as six, from different vantage points of the vehicle.”

“That's all taking place right at the precious coveted spot right outside the curb. The notion that that somehow is a small impact to the airport, I think it's just factually not true,” he added.

Meanwhile, officials at ILM decided to establish a permit with Turo after state legislation was signed that allowed peer-to-peer organizations to operate in the state, Gary Broughton, ILM’s deputy airport director, said in an email.

ILM officials have met with Enterprise to address its concerns, Broughton said.

“All of our rental car partners are important to us as is the service provided to the community,” Broughton said. “As peer-to-peer is a new concept, we agreed to enter into a one-year agreement after which time we can evaluate their success and operation and make any needed changes to any possible future agreement.”

Turo officials hope these two permits will set a path for other airports to follow.

“Our hope is that when other airports see, whether it's the Concord (California) airport or Wilmington airport, that they'll see that this is a path that they can follow and use this as a model. We're very grateful and we're very hopeful that this is a sign of things to come,” Fang said.