Cucalorus Connect: Innovation Can Help Save The Beach 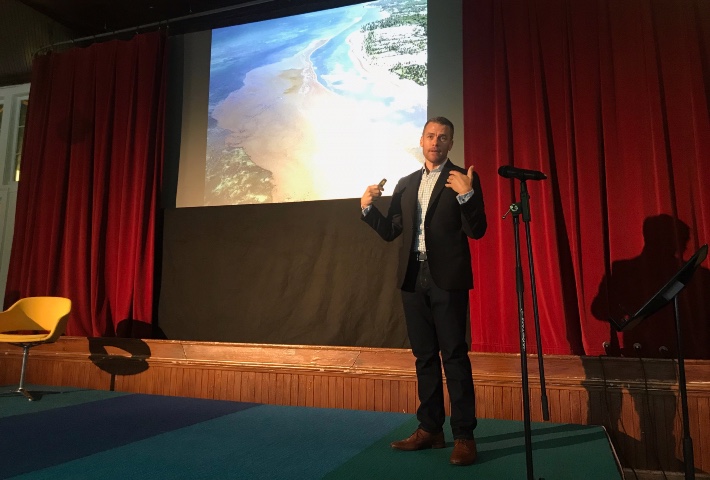 Jake Kheel of Fundación Grupo Puntacana talks about building resilient coastal companies and communities Friday at the Cucalorus Connect Conference. (Photo by Cece Nunn)
An unwelcome visitor arrived in 2011 on the beaches of Punta Cana, a private resort community in the Dominican Republic.

Brown seaweed called sargassum covered the white sand of the main tourist attraction and kept visitors away, harming what is usually a thriving industry.

Kheel, speaking at the Cucalorus Connect Conference in Wilmington on Friday morning, used the seaweed issue as an example of how a private company, Grupo Puntacana, and its foundation is helping to build a more resilient coastal community and company.

He also shared how those lessons could apply to Wilmington-area beaches and how searching for solutions to coastal problems can spark innovation.

“Our company traditionally had been very conscientious of protecting the beach because it would be insane to not protect this asset that is attracting all these people,” Kheel explained to the Cucalorus Connect audience gathered at the Brooklyn Arts Center on Friday in downtown Wilmington.

Eventually, he said, they teamed with a Europe-based company called Algea Nova to halt the sargassum with a barrier and then collect it in a barge. The company had tried its own barriers, which had drawbacks such as clumping the seaweed and causing water discoloration, before partnering with Algea Nova.

“As an innovator, we attracted other innovators,” Kheel said. “I think this is a pretty common theme for a lot of innovators is when you're out ahead of the curve, when you're thinking out of the box, when you're doing strange things, other people will have good ideas or sometimes terrible ideas, but generally good ideas are attracted and want ... if they can take advantage of what you've done, try and learn from that and try and push the ball along a little bit further.”

From there, the foundation looked for ways to reuse the sargassum and turn it into a marketable product. That effort resulted in creating compost, recyclable plates and biogas.

Other examples Kheel used: encouraging the turning of an invasive species in the island’s protective coral reef, angelfish, into an ingredient for chefs and souvenirs for visitors; and employing fisherman to help replenish the coral reef.

So what does Punta Cana have in common with Wilmington?

Kheel ended his talk with ways the solutions can materialize.