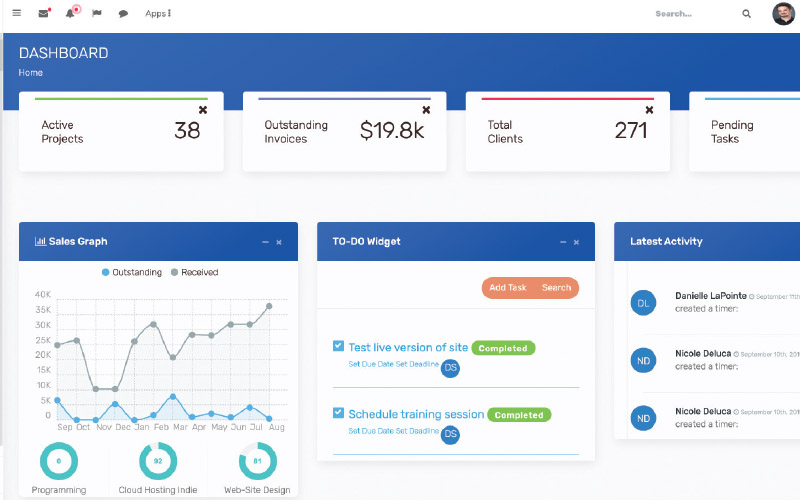 SWELLEntertprise, a cloud-based application for small businesses to manage client and project information, was developed by Derek Schmidt, who also founded DesignLoud. (Photo C/O Swell Enterprise)
While working at Wilmington- based DesignLoud, a website design and marketing agency, founder and CEO Derek Schmidt and his team had to juggle through five different apps to keep track of client, project and accounting information.

Flipping through different platforms throughout the workday was inconvenient and also meant time wasted, so Schmidt sought a way to solve that issue.

“What we found was that we were updating information across all these different applications every day. So if my team needed to find something, it took them a little bit of time to go through and find this information or duplicate data entries,” Schmidt said. “That’s when we developed SWELLEnterprise for our own internal use. And then later, after having people ask us about it, that’s when we decided to start the software as a service company.”

That company is SWELL Systems, founded in 2017, which developed its first product, SWELLEnterprise, a cloud-based application for small businesses that manages client information, invoicing, documents, projects and email marketing leads, among other services.

“Clients replace about three or four applications with this one,” he said.

While the application was designed for creative agencies like DesignLoud in mind, it’s been used by tax professionals, a pet food company, business consultants and coaches, photographers and freelancers, Schmidt said.

It was also used by Wilmington roofing company Alpha Roofing, which went from receiving 20 to 30 calls a day to 300 a day after Hurricane Florence.

Saving time and increasing productivity are the main advantages that Schmidt highlights about the product.

“By having all of these features in one place in an integrated environment, it allows businesses to automate a lot of their workflow,” he said.

One feature of SWELL Systems is it caters to small businesses that would otherwise not be able to afford a more complex platform.

“Our price point that we’re coming in at in our offering makes us ideal for companies that are about 30 employees or less, within their first five to 10 years of business. So there is a point that users may graduate out of this and move into something like Salesforce,” Schmidt said. “I don’t really consider Salesforce a direct competitor to us because we’re not trying to be that. What we’re trying to do is give those smaller micro and small business owners those same tools that a Salesforce would provide, but for a fraction of the cost until they graduate into that full ERP (enterprise resource planning) product.”

SWELL Systems currently works out of tekMountain and has three employees and three contractors.

While he already had experience with opening a business with Design- Loud in 2011, Schmidt said opening a tech-based business had its own method.

“It’s a little bit different than the agency in the sense that we have some legal things that we had to go through to make sure we were compliant to sell to customers internationally. We have some international customers, as well as privacy policies,” he said. “And then we had to set up the system and the operations of the software business.”

In the process of starting and growing his second company, Schmidt received support from the Wilmington community, including mentorship from tekMountain, Network for Entrepreneurs in Wilmington and the Center for Innovation and Entrepreneurship at the University of North Carolina Wilmington.

Those connections led Schmidt to the NC TECH Association, and in 2018 SWELL Systems applied for an NC TECH Award, becoming a finalist. This year, the startup was a semi-finalist for the spring NC IDEA SEED Grant.

With two businesses to run, Schmidt has been dividing his time throughout the week, devoting certain days to DesignLoud and others to SWELL Systems.

“We hope to double [SWELL] in the next year; we have been growing at a really great rate,” Schmidt said. “Within the next 12 months, after proving a little bit of traction and hopefully receiving some grant money, we hope to start seeking funding from investors.”

As a software company in Wilmington, SWELL Systems looks up to other businesses that have seen success.

“I would love to one day grow to the point that we’ve seen some other local businesses like PPD, Live Oak, nCino and Untappd grow,” he said. “Hopefully we’ll put Wilmington on the map as far as the East Coast Silicon Valley one day.”