Have The Kids Done Their Chores? Wilmington-based App Aims To Help 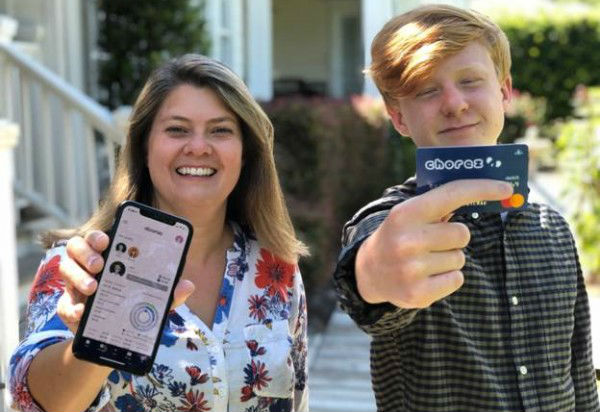 Christine Robichau and her son Isaac Robichau demonstrating the Chorez app and debit card that allow parents to monitor assigned chores and make digital payments. (Photo courtesy of COWALA Co.)
Wilmington-based COWALA Co. has launched Chorez, a household chore management mobile app that uses technology to change the way parents manage and pay their kids for the chores they have completed.

Christine and Peter Robichau, COWALA cofounders, said they wanted to develop the product as a way to motivate kids to do their chores and teach them about money.

“I have four kids and for almost 20 years now, we've been dealing with this frustration of wanting our kids to do chores but to do them well and to do them consistently,” Christine Robichau said. “It was a problem we wanted to solve in our own family and being at the park and talking to moms, everyone had these same frustrations. And so our thought was this is a great way to solve that problem and keep the nagging out of it and to make it a habit-forming thing for the kids.”

With the Chorez app, parents can set up an account and designate chores for the young members of the family. Kids can take before-and-after pictures that include time stamps.

Through Chorez Premium, which is $59.99 annually, parents can pay their kids through Akimbo, the app’s prepaid debit card.

“In going along with the theme of trying to solve problems that parents face. It's not simply getting their kids to do their chores, but when they do their chores or when they help out around the house, no one carries cash anymore,” Peter Robichau said. “We don’t have cash for anything; we pay with debit cards.”

COWALA (which thanks to the Robichaus' kids, stands for Cool Organization With A Lame Acronym) partnered with Usio Inc., a Texas-based payment solutions provider to integrate the debit card into the Chorez app, Peter Robichau said.

Additionally, with the app’s Fair Share feature, parents can pass the cost of the app to their kids through weekly payments that cover one year’s subscription cost.

“It was an important part for us that we included in our software a Fair Share feature,” Christine Robichau said. “A portion of their earnings goes towards paying (the subscription) just like you go out to work and you have taxes taken out.”

“It’s helping them understand what a paycheck looks like when you get it,” Peter Robichau added.

Since the launch Tuesday, there have been about 200 downloads of the app through the Apple Inc. App Store and Android’s Google Play, Peter Robichau said.

“We received some feedback from those who have downloaded it. Someone just sent a message through our website and said, ‘I was looking for over a year for something that did all that this application does,’” Peter Robichau said. “We’ve been rolling this out slowly so that we can handle the customer support so that we can find any glitches or quirks. And we've hammered those out for the most part.”

The family-owned startup, which began developing the Chorez app in 2018, has five employees, including three part-time developers, plus Christine and Peter Robichau.

The Robichaus hope to continue adding family finance products and tapping into the millennial tech parenting market, they said.

“This is really our minimum viable product but there's a lot of potential once you set up a platform for earnings to look at other ways to do financial education and to really build on the financial technology aspect of this,” Peter Robichau said. “We do have about three or four different product features that are in our development plan that we should be releasing, some in the next two to three months and some in the next 12 months.”