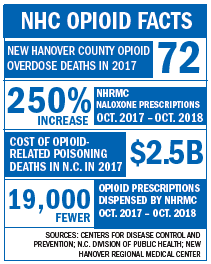 Since 1999, the United States has experienced an increase in the misuse of prescription and nonprescription drugs, making opioids the leading cause of drug overdose deaths in 2017, according to the National Institute on Drug Abuse.

The opioid epidemic is a nationwide problem that is also affecting the Cape Fear region; there were 72 deaths from opioid overdoses in New Hanover County in 2017, according to the Centers for Disease Control and Prevention.

This pressing issue is what motivated local entrepreneurs to see how they can apply technology to solve a community problem.

In September 2018, David Reeser and Stan Trofimchuk founded the startup opiAID, a technology-assisted therapy platform that seeks to tackle the opioid crisis.

“We thought to ourselves, ‘How can we use technology, specifically artificial intelligence (AI) and machine learning in a way that wasn’t scary and in fact improve the human condition?’” Reeser said. “The desire to start the company was wanting to help our neighbors or anyone struggling with opioid abuse.”

At the center of the company’s products is a wearable device being developed to detect cravings and overdoses.

“If it detects cravings, it will reach out to a support group to help that person get past that point and continue on their recovery path,” Trofimchuk said. “Then if it detects an overdose, it will be capable of reversing that from the wearable itself, so basically saving lives on the spot.”

The wearable would deliver naloxone, a medication that can reverse overdose symptoms.

An online platform that would use data to monitor the user would be connected to the wearable.

The startup, housed at tekMountain, is in the data collection phase. Its goal is to learn what factors cause opioid addiction and what helped those who have recovered.

“We’re trying to improve efficiencies of treatment centers by finding out from data what contributes to successful treatment the most and what can be improved to have greater success,” Trofimchuk said.

While there is data available on opioid misuse and treatment, opi- AID needs more to be able to apply machine learning and eventually cater the data to each individual.

“One big challenge that I see with treating opioid use disorder is the ability for our partners to be able to share data and share best practices,” Reeser said. “There is a data compliance law around opioid addiction; it’s so strict it keeps us from sharing data. How can you learn from each other when you can’t even share the data?”

opiAID has applied for a Small Business Innovation Research grant from the National Institutes of Health that would be used for research and development, Reeser said.

Reeser and Trofimchuk, also founders of IT Works, a cloud-based information technology company in Wilmington, have been working with local professors and specialists to be able to ensure that opiAID is medically valid.

They include opiAID chief medical officer Douglas Waldrep, a psychiatrist who specializes in substance abuse with New Hanover Regional Medical Center; David MacQueen, a clinical psychologist and assistant professor with the University of North Carolina Wilmington; and Wendy Donlin, an experimental psychologist and associate professor at UNCW.

opiAID is incubating with AI Bridge, a local organization whose goal is to create an ecosystem for companies that want to use AI to solve an issue. Both Reeser and Trofimchuk are part of AI Bridge.

As part of its efforts, AI Bridge will be bringing Rob Nail, CEO and founder of Singularity University, a tech education organization, to speak about artificial intelligence in Wilmington in the fall.

One important component for tackling the opioid epidemic is addressing the stigmas around opioid use disorder, Reeser said.

That is why opiAID’s mission is to work with neighbors and partners, two terms they have chosen that identify those with addiction problems – called “neighbors” – and individuals and organizations seeking to help, which are called “partners.”

“Everyone has a physiological capacity to become addicted to an opiate drug. So, it’s not a moral failing; it's a physiologic response,” Reeser said. “We honor that by calling them our neighbors because they deserve love, respect and a solution that’s actually going to help them recover more effectively.”

The goal is to have the first commercial- grade version of opiAID available in July or August 2020, Reeser said.

“It’ll likely look like a software and a platform in addition to a wearable,” Reeser said. “The wearable won’t have some of the bells and whistles that the future wearable will, but it will have the capacity to learn and to be biometrically tuned to the individual so we can know what uniquely looks like a craving for one of other neighbors.”

The naloxone delivery feature for the wearable is a few years down the road because of studies and U.S. Food and Drug Administration approval that have to take place before it can be used.

opiAID’s founders plan on not monetizing the product in Wilmington, Reeser said, and when it expands to other areas, users should be able to get a wearable for free.

“The strategy that we’re taking is that no neighbor will ever directly pay for this,” Reeser said. “If they are coming from a clinician rehab program, the rehab will pay for the software.”

Insurance should also be able to cover the costs, he said.

“The overarching goal of what we’re trying to accomplish is very simple. The means to get there, maybe a little bit more complicated,” Reeser said. “Ultimately, we just want to save some neighbors, and we believe the approach to do that is to use lots of data to help us create custom treatment plans and to get real-time insight on how someone’s recovering by using wearables.”