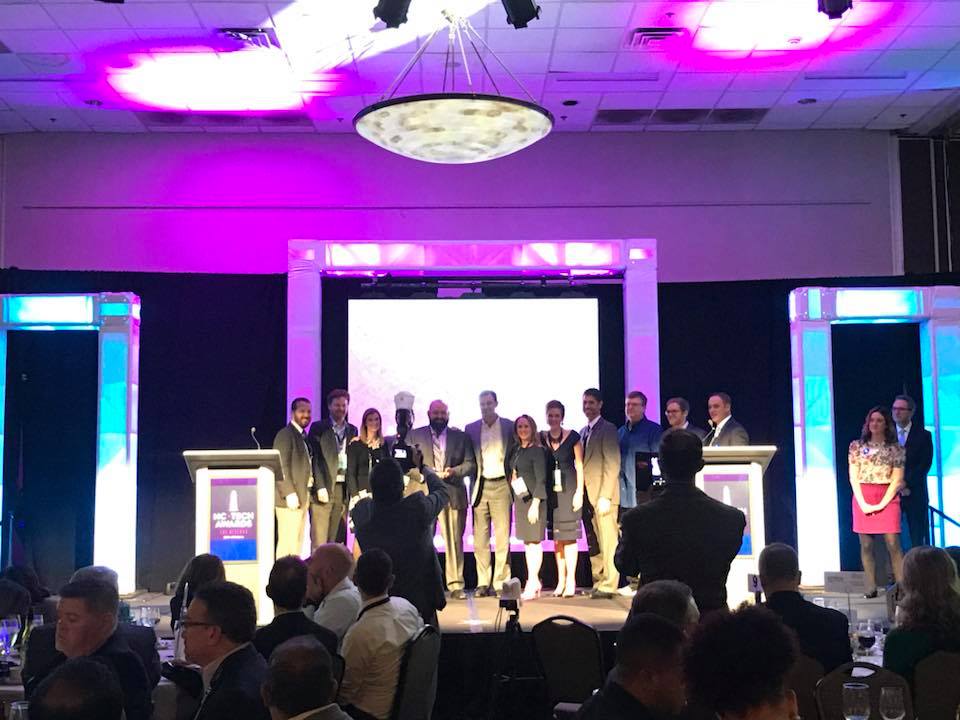 The Top Ten Startups to Watch winners, including Wilmington-based myBeeHyve, being recognized at the NC TECH Awards Gala Thursday in Durham. (Photo Courtesy of NC TECH)
Two Wilmington-based companies are among the winners of the NC TECH Awards announced Thursday night, which recognizes North Carolina companies for their contribution to the technology industry and the community.

KWIPPED received the Use of Technology award in the e-commerce category and myBeeHyve was chosen as one of the Top 10 Startups to Watch. myBeeHyve’s win was announced in October.

“Year after year we continue to see a high level of excellence and innovation from the technology community in North Carolina,” Brooks Raiford, NC TECH’s president and CEO said in a news release. “We’re pleased to highlight such a diverse mix of companies and leaders at this year’s Awards event.”

KWIPPED is an online B2B equipment rental marketplace that rents, leases and finances commercial equipment from a global network of suppliers.

Robin Salter, chief marketing officer at KWIPPED, said leaders at the company were excited when they found out they were nominated for an award but did not expect to win.

“We’re still a young, small company and some of the other companies in our category were bigger and more established, so we thought our chances of winning were slim at best,” Salter said in an email.

Robert Preville and Rob Kaiser are part owners of KWIPPED. They also own the Greater Wilmington Business Journal, where Kaiser is the publisher.

myBeeHyve is a company that offers a software system that allows those in the marketing industry to manage their contacts. The company was founded in 2017 by Jennifer Turnage, the company’s CEO, and Megan Sumrell, the COO.

In a previous Wilmington Business Journal story, Turnage said they were excited and honored to be recognized among other technology companies in the state.

Pierre Naudé, CEO of nCino, a Wilmington-based software banking company, was a finalist for the Tech Executive of the Year award. That award went to Greg Boone, president and CEO of iCiDIGITAL, a Raleigh-based company that creates and analyzes digital user experience.

SWELL Systems, a software firm that developed the SWELLEnterprise app for business management, was a finalist for a Use of Technology Award in the customer service category.

Republic Wireless, a mobile network operator based in Raleigh received that award.

“We strive to highlight startups and early-stage companies throughout the year, and a few years ago added the Top 10 Startups to Watch category,” he said in an email.

While most of the NC TECH award winners are based in the Triangle area, some Wilmington businesses are getting awareness.

“Wilmington-area startups similar to KWIPPED and myBeeHyve have a strong record of being featured in our various recognition events,” Raiford said.

As KWIPPED officials networked with others at Thursday’s award gala event, they heard comments from people in the Research Triangle Park area that Wilmington’s tech sector was starting to get momentum and recognition, Salter said.

“Wilmington is truly ripe to become a legitimate NC tech hub and KWIPPED is honored to be a part of that movement and to support our vibrant tech community,” Salter said. “We are sincerely proud to tell others that KWIPPED was founded and is headquartered in Wilmington.”