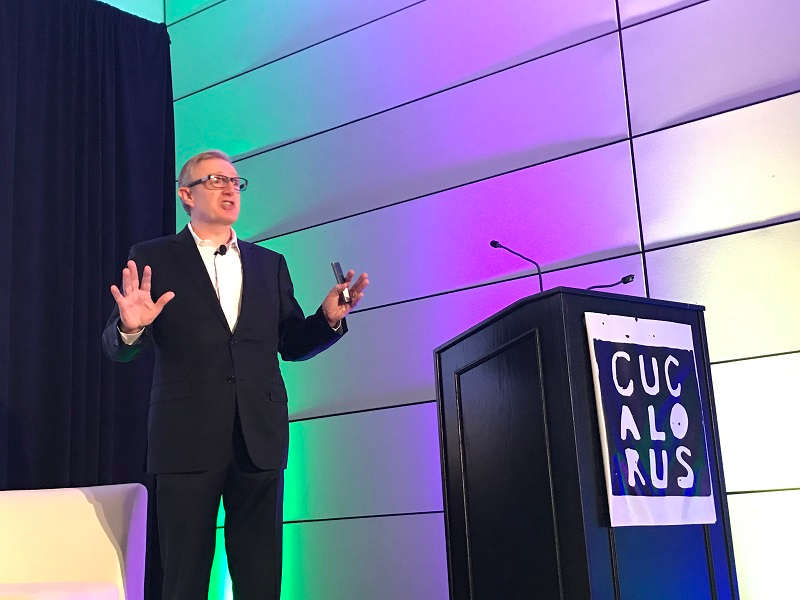 That was the message in two discussions Friday at the annual Cucalorus Connect conference, which was on its second day of events and break-out sessions for five different tracks: Healthtech, Fintech, Gigtech, Brew Community and Startups.

The annual conference started Thursday with several sessions in Gigtech and Brew Community, along with a keynote by Susan Ellis, director of brand and corporate social innovation at SAS.

Friday’s events in the Healthtech track kicked off with a symposium led by Chris Hillier, executive director of New Hanover Regional Medical Center’s Innovation Center, which is based out of tekMountain.

The innovation center was launched this summer through a partnership between NHRMC and tekMountain to foster and test ideas that would advance health and wellness.

Hillier's talk Friday focused on various ways technology is changing the health care industry, ranging from advances in biotechnology to handheld technologies that are pushing the industry into a more patient- and consumer-based model.

"Up until recently, we thought health care revolved around the physician, but now we know it revolves around the patient and the consumer," Hillier said.

The rate of technology adoption is increasing, disrupting traditional methods of health care, he said. More consumer-based products are being invented and changing the market, and consumer access to technology, he said.

One of the pieces of technology Hillier said he would like to explore in Wilmington is handheld ultrasound technology, which could replace the large machines used today, he said.

Hillier said that handheld ultrasound technology has been around for about 10 years, but medical students are still being taught old technologies.

"This is a serious problem," Hillier said. "And I want Wilmington to be part of the change on that. We should be using this technology. It's no point just having it there."

Hillier said he is also talking with an inventor and company leader about a handheld cell phone version of a Magnetic Resonance Imaging (MRI) machine.

"You don't need a room with a giant magnet; you need an iPhone," he said. "That's fairly rough technology, so hopefully we will do something here on that."

Voice technology is also the next step in health care, he said.

"You can expect to see New Hanover developing some very cool voice and systems coming through ... there's a number of reasons for it. But essentially its just a natural way to communicate. It's easy. Touch screens have been awesome and it was great at the time. But now we really want voice," Hillier said.

In addition, he is also advocating to build a "world-class health experience center" in Wilmington.

"If you're a health system and you're not AI-, virtual- and digital-enabled, you are about to be replaced by a health system that is," Hillier said of the overall industry.

Telemedicine is an important piece of the future of health care.

"Here in New Hanover, we have actually identified that is something that we need again for our rural areas. And we saw during the hurricane when not just your patients are cut off but we had doctors cut off who couldn't get back into Wilmington to treat their patients," Hillier said.

Hillier said he is in the early stages of developing an event in Wilmington around health innovation during a disaster. That could take place about a year from now, Hillier said, adding that he is working with colleagues in Houston, New Orleans and around the world who could come to the area to talk about the innovation that has to be done to prepare for the next hurricane.

Technology and innovation are also disrupting the financial industry, according to financial speakers Friday. That was a focus of a fintech break-out session Friday with Timur Davis, principal at Canapi Inc., and Christopher Roede, partner at Poyner Spruill.

“Technology is eating every industry,” Davis said. In 2006, Davis said there was a very broad mix of industries represented in the market. But by the time 2016 hit, the largest were technologies companies.

“It's really amazing how technology is taking over," Davis said. "Data is the new oil … and financial services are no exception.”

"We believe there's a tremendous upheaval in the financial services industry. The market conditions are changing very rapidly and technology is really disrupting the traditional business models," Davis said.

So what does that mean for the future of the banking system? Davis said it is uncertain; however, things are happening at Canapi Inc. that will enable that future.

Canapi Inc. is a fintech company and a wholly owned subsidiary of Live Oak Banchares, based out of Wilmington.

"We're investing  . . . into an ecosystem of companies that fulfill our vision, our philosophy  . . .[which is] finding companies that are run by entrepreneurs who know what they're doing in the industry," Davis said.

Canapi officials believe that you have to be utilizing the technology of the future in order to develop products for the future, he said.

"So when we say nextgen platforms, we mean first supports, cloud-based technologies, but even beyond that, so-called cloud-native technologies," Davis said.

These are technologies where not just storage is in the cloud but computations are embedded in the cloud, he said.  It also involves open, API-drive technology, "being able to easily connect with other products and services and sort of working together all in unison," he said.

"Finally ... really trying to disrupt outdated old legacy technologies that have no place in the 21st century," Davis added.

The final piece to the company's philosophy is based around trying to invest in companies that will build the digital bank of the future, he said.

But the regulatory industry also needs to change to adapt to the changing marketplace for financial technology companies, said Roede.

"The backbone of the U.S. financial system is commercial banks," Roede said. "... banking institutions are probably the most heavily regulated industry in the United States besides health care. There are at least four or five different federal regulators that will oversee these banks."

Roede said the current and developing regulation that fintech companies experience through their banks is ongoing.