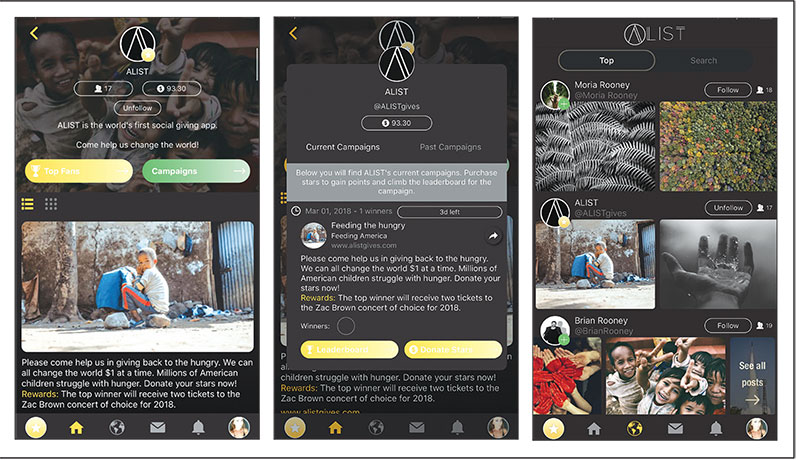 Moria and Brian Rooney launched ALIST (screenshots shown above) as a giving app that taps into the growing spheres of social media influencers. (images c/o ALIST)

The online world has long provided methods of fundraising. Whether for disaster relief, helping with a person’s sudden medical expenses or giving to a religious organization, there are virtually countless outlets for online giving.

Similarly, movie stars, athletes and (typically former) politicians have long used their celebrity statuses to raise money and awareness for their chosen causes.

Inspired by Houston Texans defensive end J.J. Watt’s late-2017 campaign that raised $37 million for Hurricane Harvey relief, Wilmington- based couple Brian and Moria Rooney set out to connect celebrity do-gooders they dub “influencers” with fans eager to contribute to causes. The result is ALIST, a social media/giving app that has launched on Android and soon will be available for iOS.

“ALIST is a unique combination of social media and charity, and we are trying to merge the two as seamlessly as we can,” said Moria Rooney, a 2013 University of North Carolina Wilmington communications graduate. “With J.J. Watt, that made us think, ‘Why don’t influencers use their status and the leverage they have with their fans for the greater good?’ And that’s where the idea came about to have all of these nonprofits in one place.”

Since that time, ALIST has popped up online (alistgives.com) and created its app alongside family friends in the development world. The startup even nabbed a Top 50 slot for Startup Grind’s 2018 Global Startup Program.

But connecting with A-list influencers and having them join on does not happen easily or overnight. ALIST describes an influencer as a person with more than 100,000 followers on traditional social media platforms such as Facebook, Twitter and Instagram.

“The name is ALIST, but right now it’s hard to go after those A-list influencers,” Moria Rooney said. “They want to see everything up and running, not coming into it so fresh.

The use of well-known influencers, the group’s vetting process and the social media aspect of ALIST help to distinguish it from other online giving platforms, the owners said.

ALIST provides its influencers, brands and nonprofits with a one stop shop for launching, marketing and managing their campaigns. Along with collecting funds, the organization also will distribute any prizes organizers wish to give to contributors to a campaign. For its efforts, ALIST will receive anywhere from 10 to 30 percent of the money raised to cover the company’s funds-processing, material and backend support costs.

“Once an influencer comes on, they create the campaign, and it all comes through our back-end and we approve it before it goes out,” Moria Rooney said. “Then we facilitate it. Everything comes through us. It’s this big pipeline.”

For users, ALIST is not yet another outlet for selfies, stories of their children’s accomplishments or reposting news articles. Users will not connect to each other but rather will follow the influencers whose campaigns that they hope to bring awareness to. The platform will allow influencers’ fans to earn points and trophies through engagement and activity on the app that can lead to prizes from influencers, regardless of monetary contributions to a campaign.

In time, ALIST hopes to establish its own nonprofit named Famous for Good, which will extend the Rooneys mission.

“We have always had a big passion for giving back and to give the world ‘good,’” Moria Rooney said. “We want to leave the world better than we found it.”