Next Glass, Next Step 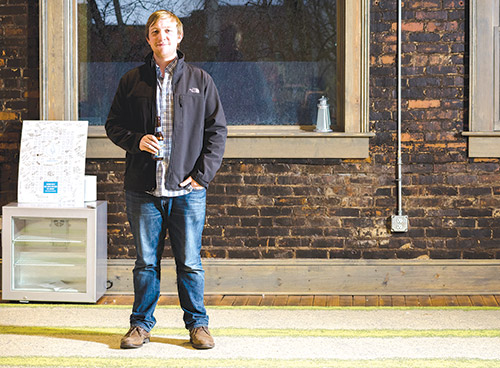 Next Glass CEO Kurt Taylor, at the company’s new headquarters in downtown Wilmington, is increasing outreach to consumers and beverage manufacturers alike. (Photo by Erik Maasch)

A Wilmington startup that began in 2012 as an app for wine lovers is now poised to influence the wine and beer scene in the U. S. and even internationally.

Next Glass, which recently moved to downtown Wilmington, also hopes to further stimulate activity in the central business district and attract like-minded companies to downtown.

Launched by Kurt Taylor, Next Glass develops software that uses science and machine learning to provide personalized recommendations on wine and beer to consumers and business tools to breweries, wineries and retailers. Its laboratory has performed chemical analyses of thousands of wines and beers, for an app that lets users record their tastes and find recommendations on what new wines and beers they might enjoy.

Under Taylor’s leadership as CEO, Next Glass has earned several statewide awards and secured some financing from local angel investors, although the company does not reveal financial information or other development data.

Lodged in its new headquarters on two floors of 21. S. Front St. and having completed a recent merger with Untappd, an app-based social platform for beer lovers, Next Glass is forging relationships with major beer manufacturers and pitching its research and resulting data as a way for beverage companies to learn what consumers are looking for in new offerings.

Building on its growing pool of chemical profiles, app user input and data analyses, Next Glass has outlined three areas of focus for 2016.

The first area – consumer promotion – will cater to Next Glass and Untappd app users, creating new apps with more ways for users to engage with the company and with each other.

The second area – inventory, curation and analytics – is aimed at wholesalers, distributors and retailers. In the pipeline are tools for point-of-sale and inventory management and distributor integration, all based on app user data.

The third area is product development, aimed at breweries and ultimately at distilleries. Next Glass hopes to use its chemical formulations of beverages, its consumer preference and behavior data and related demographic information to help beverage manufacturers guide product development.

The question arises: is Next Glass a company that provides preference profiles using technology, or is it a big data company concentrating on the alcoholic beverage market?

“While it’s probably not obvious from a consumer’s point of view, Next Glass has actually been developed from day one as a data and analytics company,” George Taylor, Kurt’s father and the company’s chairman George Taylor said. “And, in order to solve the big promotion and product development problems for our business customers, we need to know what consumers around the world want and think. That’s where our apps come in, and so we’ll continue to build and acquire engaging apps that millions of consumers around the world will want to use and enjoy.”

Although wine was Next Glass’ original concentration, the company will focus its attention primarily on beer in 2016, George Taylor said.

Because beer is more predictable to produce than wine, which can be affected by weather, vine health and soil conditions, a beer’s chemical profile is fairly consistent, he said.

Next Glass’s merger with Untappd, announced earlier this month, gives it entrée into the worldwide beer community, with Untappd’s users reporting on their preferred beer-drinking locales, their current favorite craft brews and even the friends with whom they enjoy quaffing.

With the marriage of Next Glass’s data bank and analysis capabilities and Untappd’s participant reach, the company hopes to gather data from a broad spectrum of beer drinkers. The resulting data, the company believes, will be valuable to breweries, which can look at what people are drinking, paired with a chemical analysis of those favorites.

In the next few months, Next Glass plans to increase its revenues through new products for beer makers, beer retailers and wholesalers. The company is making its first foray into other alcoholic beverages, Kurt Taylor said.

“We have already completed our initial R&D around spirits and will be adding spirits to the Next Glass platform in late 2016,” he said.

A focus on beers and spirits doesn’t mean that Next Glass will abandon wine.

“The Next Glass app and the wine side of our business is growing and an important component to our overall vision,” George Taylor said.

Now that Untappd’s nearly 3 million users are part of its portfolio, Next Glass calculates that it has about 3.4 million app users. It did not specify how many of those users are wine aficionados.

The company recently brought on board Tim Mather and Greg Avola, the co-founders of Untappd, who have built their business working part time and now will devote their full-time energies to the venture, supported by a growing Next Glass employee base.

“Next Glass/Untappd currently has 21 employees, and in the next two months we’ll be hiring four new salespeople, two new developers, one lab tech and a VP [of] marketing,” George Taylor said. “And the sales team will continue to add four new people every six weeks until they reach 48 on the sales team.”

In addition to building its own capabilities, Next Glass hopes to be a catalyst for building a tech community in downtown Wilmington.

The company now has all its operations housed in 11,000 square feet under one roof in a building purchased and recently restored by James Goodnight, son of SAS founder Jim Goodnight. Renting temporary space there also is the startup Likeli, a social matching app launched in 2015 by George Taylor III, also George Taylor’s son.

Likeli, which now employs nine, plans to move elsewhere downtown in a few months, according to George Taylor.

“George [III] and Kurt and I have a vision for building a startup tech community in downtown Wilmington and concentrating as much as possible in one area,” he said. “Wilmington has plenty of available investment capital through angels, and more office space will be coming online in central downtown in 2016. And so with a number of others who are involved in the ILM entrepreneurial scene and downtown real estate, we’re beginning to search out and recruit startup CEOs to move to ILM.”

James Goodnight purchased two other properties – at 222 Princess St. and 1 S. Front St. –  last year near the new Next Glass headquarters and says he shares the Taylors’ vision for a high-tech central business district.

Growing a tech community downtown will help “push downtown into the 21st century while supporting innovation and sustainability,” he said. “Wilmington has great potential to join that trend.”

While James Goodnight said he does not have firm plans for the redevelopment of his other two properties, he’s “kicking around” the possibility of retail and office uses in one of them. The remaining floor of 21 S. Front St. will probably also be fitted for offices, he said.

“We see that as an extremely important economic sector to continue to bring downtown,” he said.

“Landing Next Glass downtown was a big milestone. We have been steadily working … to attract other tech companies.”