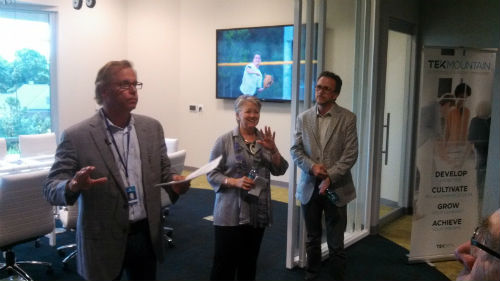 CastleBranch, a Wilmington-based firm that has quickly become a leader in student and employment screening services across the country, recently completed construction on its 60,000-square-foot addition at 1844 Sir Tyler Drive.

Officials plan to open the new building by June 26.

Brett Martin, CastleBranch CEO, said since securing tax incentives to move forward with the firm’s expansion in 2013, officials have hired 80 new employees – all while constructing its $12 million office addition.

By 2017 – their deadline to receive state and local incentives payments once 400 employees are hired – CastleBranch should have 800-900 workers on its campus, officials said.

A 5,000-sqaure-foot gym will also be housed in the new building and managed by Wrightsville Beach-based Forged Strength and Conditioning.

Thomas Welsh, a personal trainer who will oversee the CastleBranch gym, said employees would have access to personal trainers, fitness equipment and various fitness classes.

Employees will also have access to beer brewed in-house and a food truck equipped with food grown on CastleBranch’s campus and prepared by its chef.

But as visitors made their way up winding steps and elevators, it was the third floor that left economic leaders excited about the city’s destination as future tech hub.

Called tekMountain, the 20,000-square-foot technology business incubator is designed to encourage the open flow of ideas and development of tech endeavors – a long passion of Martin’s since announcing his expansion nearly a year ago.

“Our tech sector is struggling,” Martin said. “So we hope to steal them from other cities and keep them here in Wilmington.”

While no large-scale user was announced, Martin said he has been negotiating with a number of startups in major tech hubs across the country, including Austin, Texas, Boston and San Jose’s Silicon Valley area. He added he is also encouraging local startups to occupy the space.

Martin said leases will vary per user. He said the goal is to have a startup establish its base in the city and grow, but he recognizes that some people may not fall in love with the region – prompting the firm to provide lease flexibility for its future tenants.

“If they don’t like Wilmington, they can break their lease and leave,” he said.

tekMountain’s space includes touches such as chairs and furniture meant to serve as makeshift congregating spaces, collaboration pods that line the walls of the facility, flat-screen televisions, desks with charging docks and a bar equipped with coffee and beer.

“Hopefully we’ll be able to have you guys back for a glass of beer once we brew it,” Martin joked.

Martin said tekMountain will provide three public camps for patrons serious about developing their technology in their space: business camp to educate potential entrepreneurs about the business of startups; code camp to grow code crafters in specific in-demand fields such as health care; and an investor camp to help link area investors with projects.

“We look at incentives as an investment, and we’re proud to invest in you,” Decker said “Thank you Wilmington for your part in this endeavor.”

“Best of luck to you, and we hope you make a hell of a lot of money,” Saffo said to laughs and applause.