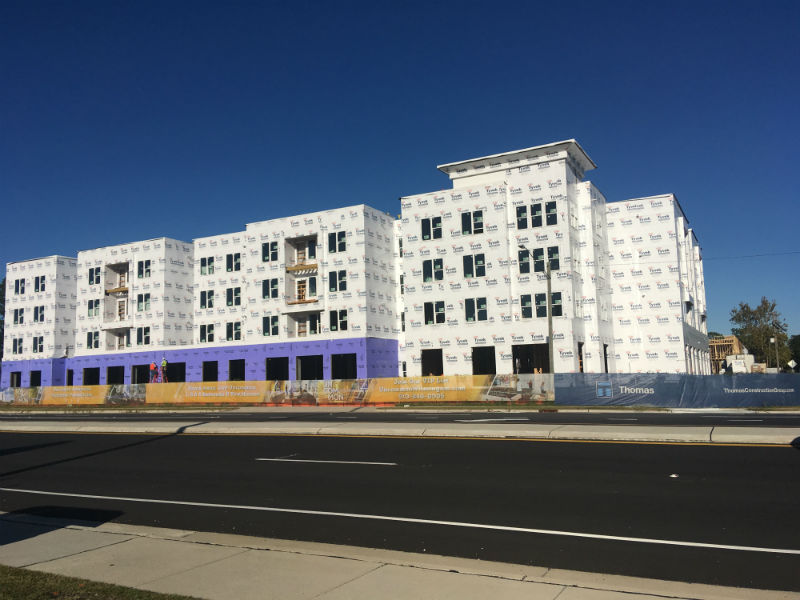 “Leasing is now active and we're doing well,” Weddle said. “We'll see the bulk of leasing happen in the spring. We'll finish the project in June or July. Construction is going smoothly and it’s going to be on time and on budget.”

The apartments will be housed in one four-story and one three-story building and the townhomes will be two stories each. There is also 5,000 square feet of retail and restaurant space.

While the retail and restaurant tenants have not been chosen, they will cater to a younger market, he said.

“Steve Hall has gotten a number of folks from coffee shops to restaurants making their approach, but we have not decided how that's going to work now,” Weddle said. “It’s going to commensurate serving the students.”

Hall, a partner in commercial real estate firm Maus, Warwick, Matthews & Co., is the listing agent for the retail space.

Initially, in its city approved 2018 site plans, the development had planned for 139 apartments and 19 townhomes. The number of townhomes was increased to provide more options for graduating students, he said.

“The townhome mix with the three and four stories is to have accommodations for the students as they mature so they don't feel like they need to move out,” Weddle said. “In other words, if you're younger, maybe you like a four-story building and then maybe you transition to a three-story building. And maybe you have a dog and a friend, and you would like to live in a more adult or quieter space, that's where the townhomes come in. So, it helps our retention.”

Uncommon replaces Kerr Station Village shopping center, which has been demolished, at the corner of Kerr and Franklin Avenue.

Previously, as a principal with Progress Student Living, Weddle helped develop Progress 910, another student apartment development at 316 Marlboro St. which was sold in 2015 Phillips Acquisitions.

Weddle said he decided to work on another student development due to the growth of the University of North Carolina Wilmington and the city’s initiative to renovate Kerr Avenue.

"The city’s redesign of Kerr Avenue attracted us to bring capital investment and do another project there in addition to the university's growing enrollment and their exceptional reputation," he said. “If the city had not had the foresight to redesign and improve Kerr Avenue and add the multi-use path so that the students can safely bike and walk, we wouldn't have come back into town and done another project.”

“We’re looking at two other projects in Wilmington and that's a direct result of the strong metrics, both demographics of the population, and the attention that Wilmington is getting nationally, and somewhat internationally as a great place to live,” he said. “But it's also because it's a business-friendly community.”