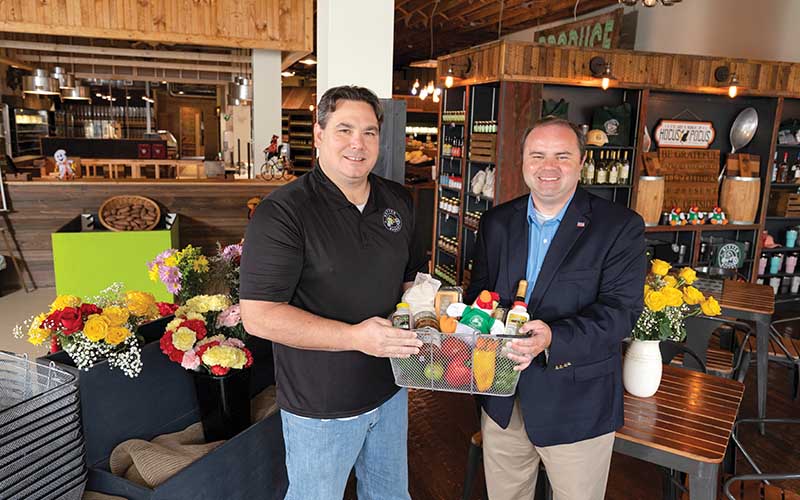 Not only will it offer fresh, locally sourced meats, produce and dairy products, but the business will also have an open kitchen where baked goods, grab-and-go meals and sit-down dinners will be prepared.

That’s just part of what makes Better Basket different. Joseph Allen and Frank Christopher Meares, the store’s creators, want to make it a community hangout – the Cheers of the grocery industry, if you will.

“In addition to providing groceries, we will also be a gathering place,” Meares said. “Customers will come in, chat with the owner and meet people. Newcomers and visitors will learn where to go for the best restaurants and other information, and locals can sit and talk.”

Better Basket is the culmination of a dream for both Allen and Meares. Allen and his mother came up with the concept years ago, but unfortunately, she died, and the idea was put on hold. Meares has long wanted to build a place that draws people to downtown, much as his grandfather’s store, 218 Antiques and Armory, did.

Although Better Basket will offer one-stop shopping, Meares stresses that it will not resemble the big box grocery stores.

First and foremost, the co-owners said they are committed to stocking fresh, locally sourced food. Products will include unique items such as yellow watermelon, special spices and distinctive spreads and cheeses, as well as the typical foods found in a grocery store. Except when out of season, all produce will come from the Carolinas, the owners said.

“We want to bring as much local fare into the store as possible and let customers see the unique flavors they can enjoy from the place they live,” Meares said.

In addition, customers will be able to choose from a range of options, including organic and non-organic farm-fresh produce and meats as well as meat substitutes. Better Basket will also provide baked goods that are made in-house. The store’s centrally placed kitchen and cafe is the heart of the store.

“When people walk into our kitchen, I want it to be like they are walking into their mom’s kitchen and finding she is preparing something wonderful to eat,” Meares said.

Just like at home, customers will be encouraged to try different foods and ask questions about the dishes the chefs are cooking up. They can even get the recipes for the dishes they like.

During the day, the kitchen will serve good, freshly made food at a reasonable price, Meares said. In the mornings, customers can get omelets, bagels and other breakfast dishes; and in the afternoon, they can get salads, sandwiches and items from the hot bar.

“Whoever attends one of these events will truly get a one-of-a-kind meal and experience,” Meares said. “It’ll be like coming into a Victorian home and dining in the kitchen with the chef.”

Opening a grocery store is something of a leap of faith for Allen and Meares, as neither has worked in the industry. But they both have experience that gave them a leg up on their dream. Meares has met numerous area farmers through his work as a New Hanover County soil and water conservation district supervisor. Also, as several of Meares’s relatives own farms, he is no stranger to the ins and outs of farming. Allen, who grew up on a farm, knows even more about what it takes to turn out high-quality crops and meat.

The owners’ agricultural background has been critical to finding farmers to supply Better Basket’s foods. Although a number of farmers contacted Meares and Allen when they heard about the store, Meares and Allen made it a priority to reach out to farmers who met their standards. That is, farmers who treat their land and animals well and farm in a sustainable way.

“The flavor of the food that comes from these farms is so much better than processed food,” Meares said. “It produces a much better meal.”

Meares and Allen are also using technology to enhance their customers’ grocery buying experience. For example, customers can scan a QR code to learn about the farm each food product comes from. Plus, the owners will use software pricing programs to ensure the store’s prices are as competitive as possible.

Opening Better Basket hasn’t been without its challenges. The owners have had to address the issues that arose when working with an older building and ensure the store met each of COVID’s changing safety regulations. Construction on the kitchen was stopped for the filming of the Hallmark movie Christmas in Harmony. And, as Meares and Allen don’t have trucks yet, getting produce to the store has been, and is, a struggle.

“It’s been a constant slow roll, but we’re almost there,” Meares said.

The store has already had a soft opening, but Better Basket’s grand opening, which is slated for mid-October, is expected to coincide with the kitchen’s completion.

Once the downtown store is on a solid footing, Meares and Allen said they hope to open similar groceries in other food deserts in New Hanover County.