Shaping The Gateway To Wilmington 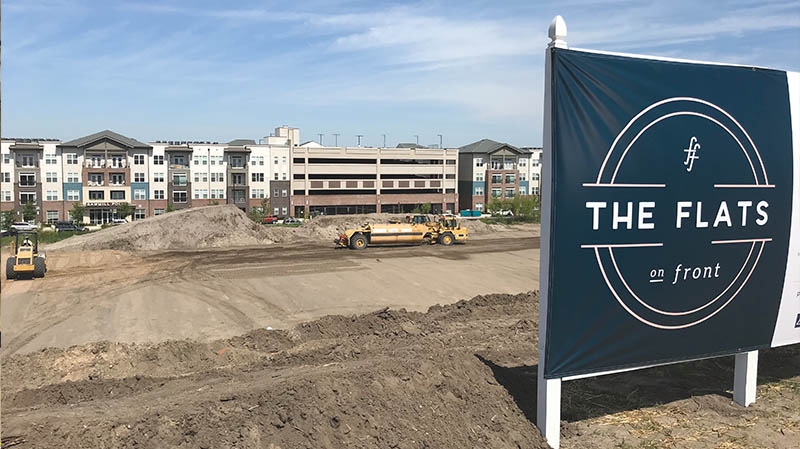 Crews shape the site where The Flats on Front apartments will be located, directly in front of Sawmill Point Apartments (shown in the background), near the city’s northern gateway. Photo by Cece Nunn
Northern downtown Wilmington is a gateway to the city, and some say that’s why it’s important to have a hand in what it might look like over the next decade.

City officials are preparing to consider a request for redevelopment proposals for city-owned property at downtown Wilmington’s northern gateway, but it could be several years before more major changes come to the area.

Wilmington Mayor Bill Saffo said recently that whatever happens in the gateway, he’d like to see a project with tenants that will attract more visitors to downtown’s northern riverfront area.

“It’s gotta be right,” Saffo said of the potential mixed-use development that could come to the area. “This is the next hot spot.”

A resolution soliciting proposals for the development of the city-owned property is on the agenda for Tuesday's Wilmington City Council meeting.

"The city bought the properties several years ago in an effort to secure high quality redevelopment because they are located at a key gateway into Wilmington. The proposal calls for a visitor’s center or other public space, along with a multi-use project with commercial space and residential units," according to a city news release. "Housing included in the redevelopment plan should have units available to middle income wage earning families such as teachers, nurses, firefighters and police officers, per a City Council resolution approved in 2017."

Already, a 273-unit apartment complex called The Flats on Front is expected to be complete by 2021, according to the developer. The site for the $45 million luxury apartment project is just across the street from 1020 N. Front St.

Saffo motioned to that property, which the city bought in March 2017 for more than $1.8 million, when he explained that the City Council is expected to consider the wording for a Request for Proposals soon on what could be a mixed-use project there.

“Workforce housing should be part of that equation because it’s something that we’ve been touting, something we’ve been talking about. And since we own the property, we have an opportunity to put some here,” Saffo said.

And while council members will have different viewpoints about an eventual project, he said, Saffo thinks they’ll agree with the idea that whatever is built there should take advantage of the higher, 150-foot height or higher that would be allowed, making for a more dense project.

“This is the newer part of downtown Wilmington. It’s a clean canvas in terms of needing something to drive people down to this part of downtown,” Saffo said. “The CBD [Central Business District] is fine; we see a lot of people going there anyway, but we need more people that also are going to stay down here and be here.”

Saffo made those comments about the property after a groundbreaking ceremony for The Flats on Front in late April.

He said the aesthetics of the redevelopment will be also be a factor. With workforce housing likely being addressed, “then it comes down to what is the structure going to look like because obviously one of the main reasons that we bought the property was because it’s a gateway into the city, so what the aesthetics of the project are going to be is very important to us.”

The council will consider seeking the proposals at its meeting at 6:30 p.m. Tuesday at City Hall.

The future of the property across from his site is a subject that also interests The Flats on Front developer D. Porter Jones of DPJ Residential.

He said he’d like to see some of the rundown, older buildings in the area repositioned to hold coffee shops, a brewery, a yoga studio or some other kind of neighborhood services.

“That would be kind of a win-win for our residents because that would be perceived as an amenity,” Jones said.

Crews with builder Clancy & Theys Construction Co. were clearing the site April 25. The property is nearly 6 acres at 111 Cowan St. in front of a separate apartment development, Sawmill Point.

“We expect to open our first units in May of next year,” Jones told those gathered during the April 25 groundbreaking ceremony hosted by Wilmington Downtown Inc.

The Flats on Front, a joint venture partnership between DPJ Residential and Chaucer Creek Capital, is not the first Wilmington project for Jones.

“We invested in Wilmington in 2015; we bought some land over near Mayfaire Town Center, and at that time we were wondering what we were missing because it seemed like a no-brainer,” Jones said of the site on Sir Tyler Drive that now holds the 240-unit apartment community Mayfaire Flats.

The land for Mayfaire Flats had been zoned for office and industrial use with a medical office building planned there at one time that never got developed, Jones said. DPJ Residential built Mayfaire Flats there instead and has seen success with the project, he said.

The first building at The Flats on Front will hold 46 units, and the second will hold the remaining 227. The project also includes a pocket park on city-owned land, a dog park, a pool, a private parking garage and 15,000 square feet of amenity space including a party terrace with an outdoor kitchen that will overlook the city’s upcoming North Waterfront Park.

The Flats on Front isn’t the only apartment project underway near the Cape Fear River’s northern riverfront. Others include Pier 33, a 286-unit project in front of Port City Marina where construction began earlier this year.

Projects like The Flats on Front, Saffo said, continue the work local officials and private entities have done in downtown Wilmington, with the riverfront along the northern Cape Fear River being one of the most recent areas to benefit from private and public investment.

Jones said, “We would hope that this area fills in with some sort of commercial space, whether it’s additional office space, even if it’s mixed-use but it has commercial at the bottom.”

Editor's Note: This version has been changed from the May 3 print edition to include updated information.