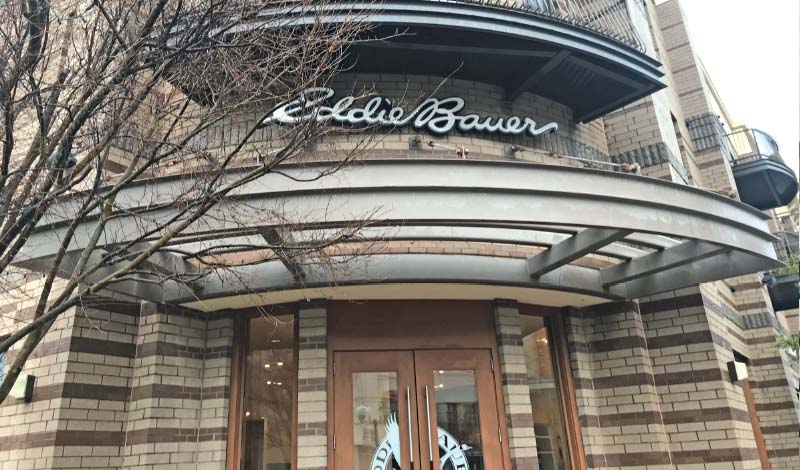 The Eddie Bauer store at Mayfaire Town Center off Military Cutoff Road closed in January with a sale and a farewell sign. The center also lost its J. Crew store last month. (Photo by Cece Nunn)
Two iconic national chains closing their Wilmington locations in January prompts the question: Who might be next in the local market?

Fashion retailers J. Crew and Eddie Bauer have left their spots on Main Street in Mayfaire Town Center, the shopping complex built on Military Cutoff Road in 2004. Mayfaire has been credited with luring national chains away from Independence Mall on Oleander Drive to its high-income zip code near Landfall and Wrightsville Beach.

In January, developers announced that the stand-alone Starbucks at Mayfaire Town Center would be moving across the street to Renaissance Market, a new, small center anchored by organic grocer Earth Fare.

Could Wilmington expect to see more departures from Mayfaire Town Center this year?

Mayfaire officials responded to that question in an email Jan. 22 from Paige Coniglio, specialty leasing manager at Mayfaire, by saying, “That is the nature of retail; stores are always opening and closing for one reason or another.”

While the retail market in general had a nice year in 2018, with about 10 percent growth, said James Hunt, a marketing professor at the University of North Carolina Wilmington, that expansion mainly came from online shopping.

“And so the stores, the brick-andmortar clothing stores last year only had about 1 percent growth, and that’s all they’re predicted to have in the near future,” Hunt said. “That 1 percent growth is just not enough.”

National chains have overbuilt brick-and-mortar stores and accumulated debt in a lot of cases, Hunt said.

“I hate to jinx it, but I think another one or two [national chains] will fall” this year, Hunt said.

Every year, national publications have articles explaining which retailers could still be struggling in the months to come, and J. Crew and Eddie Bauer have appeared in some of those reports, including a Forbes article by Pamela Danzier titled, “9 Retailers on Life Support.”

Also among the nine are other companies with Mayfaire locations, including Chico’s and Gap (which owns Banana Republic), and Loft, a store at Independence Mall that’s part of the same corporate group as Ann Taylor, Lane Bryant and Dress Barn.

In the cases of J. Crew and Eddie Bauer, both are historical names in the retail industry. The first Eddie Bauer store was opened by the company’s namesake in 1920, while J. Crew was founded in 1947.

Mayfaire officials said they could not speak for individual brands, but their property’s tenant mix is always evolving.

Asked how the departures of Eddie Bauer and J. Crew will impact the center, Coniglio said, “These closures give us the opportunity to expand current tenants and/or bring in new, in-demand retailers. We receive inquiries daily. Our Permanent Leasing Team is working with a number of exciting tenants. We look forward to announcing those retailers once leases are signed.”

Even before Eddie Bauer and J. Crew closed, Mayfaire had some spots to fill, including former restaurant parcels in front of the Belk at Mayfaire. One of the former restaurants, which was a Macaroni Grill until it closed in 2015, was demolished last year and the empty spot includes a CBL “For Lease” sign.

Another restaurant building at the center, which at one time housed Main Street Brewery not far from the former Romano’s Macaroni Grill location, is also vacant.

So what are the latest strategies for properties such as Mayfaire Town Center in an ever-changing changing retail landscape?

“Centers are becoming multidimensional by offering a fully integrated experience,” Coniglio said. “They are evolving into cities within a city. Mayfaire is no different. We offer our broad customer base a destination where they can go and find everything on their shopping and dining list.”

Many businesses that have recently leased spaces in some of the most visible Wilmington shopping centers are restaurants, service-providers or entertainment.

Shoppers at The Pointe at Barclay in Wilmington’s midtown, for example, won’t find a place to buy shoes there, but they can get their toenails done and eat lunch or dinner.

Brookfield Properties, owners of Independence Mall at 3500 Oleander Drive, submitted plans to the city last year for the first phase of The Collection at Independence, the mall’s redevelopment project announced in March.

The plans also showed that the largest retailer would be 50,000 square feet along the new outdoor corridor on what’s now the Sears side of the mall, along with two new restaurant outparcel buildings closer to Oleander Drive. The plans didn’t include specific retailers, and no new announcements on the transformation have come from Brookfield Properties in recent months.

It remains to be seen what kind of retailers will be attracted to the redeveloped mall.

“I’m nervous about what new businesses Mayfaire can attract [to the spaces left by Eddie Bauer and J. Crew], and they’re established now,” Hunt said. “I’d be really nervous about the new mall.”

One of the most important things for developers to keep in mind these days, though, is whether a tenant is internet-resistant, said Raiford Trask III of Trask Land Co., which along with Harbour Retail Partners developed Renaissance Market. The shopping center also includes West Marine and Blaze Pizza.

“We’ve spent a lot of time working on internet-resistant concepts,” Trask said, “and making sure we had synergistic relationships between our tenants and our location, architecture and land plan.”