In Wilmington, Lidl Store Under Construction, Set To Be Done By August 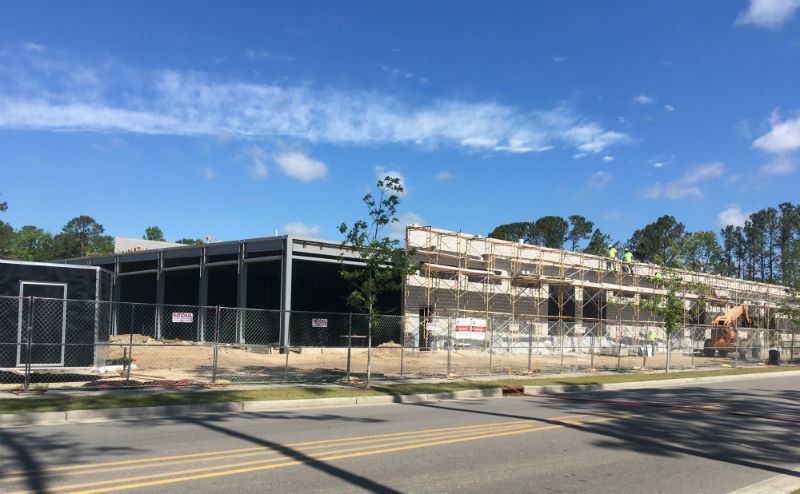 EMJ Construction, the building company working on the Lidl structure, started the project in February, he said.

While the opening date for the store, adjacent to Cambridge Village of Wilmington, has not yet been announced by Lidl US, Klassen said after EMJ construction workers leave, it typically takes about a month for the sales floor to be ready.

The Wilmington Lidl store is about 29,000 square feet and has a construction value of $3.3 million, according to a New Hanover County building permit.

Lidl US, a German discount supermarket chain, announced last week that it was opening 25 stores along the East coast by the spring of 2020. Six of those stores are in North Carolina, including one in Wilmington.

“We are committed to long-term growth in the United States and always strive to locate in the most convenient locations for our shoppers,” said Johannes Fieber, CEO of Lidl US, in a news release. “These new stores are part of the next steps in our U.S. expansion.”

Previously, Lidl had plans to open a location at a grocery store-anchored project called Arbor Commons, off South 17th Street in Wilmington.

Lidl ended those store plans and Leon Capital Group, a Texas-based development firm, sued Lidl for “wrongful termination of certain agreements,” according to the complaint filed in the U.S. District Court for Eastern North Carolina.

The case was dismissed and closed Jan. 7, according to a judgment filing from the District Court.

With a new location in Wilmington, Lidl officials look forward to serving the community, said Chandler Ebeier, public relations specialist with Lidl US.

“A typical Lidl store has about 50 employees and we believe the store in Wilmington will offer customers in the area a convenient location where they can get high quality, award-winning products at low prices,” Ebeier said.

Lidl stores are promoted as a cheaper location for grocery shopping. According to the company’s website, Lidl store products are mostly made up its own private label and the store keeps costs down with its “bring your own bag” policy and with its custom box displays that cut down on stocking hours.