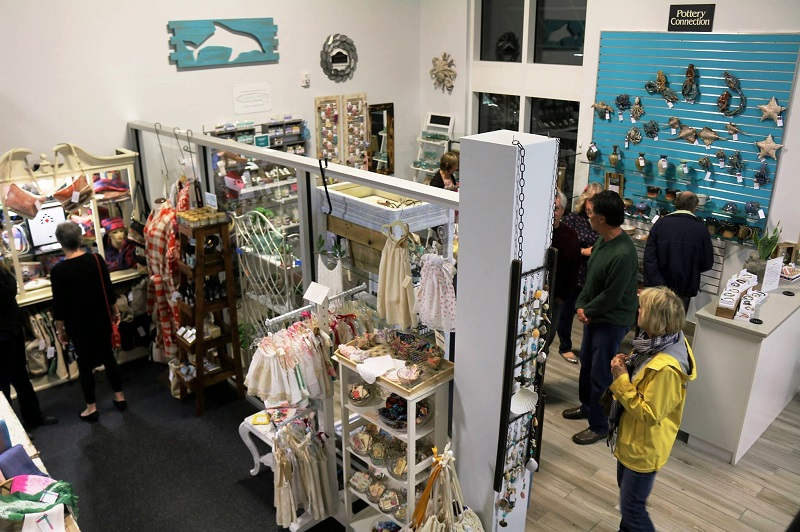 Going Local NC recently opened in its new retail space in Mayfaire. (Photo courtesy of Going Local NC)
Two new boutiques are coming to the Landfall area this spring, while a locally owned artisan shop has found a new home in Mayfaire.

Hilton Head Island-based boutique Spartina 449 has leased a 1,200-square-foot space in Lumina Station, 1900 Eastwood Road, Unit 30, with plans to open its retail shop sometime in April, according to Jessica Maples, marketing and communications manager with the company.

Spartina 449, a women’s lifestyle brand, began in 2009 and originally started with handbags and accessories. The retailer has since started a jewelry collection and launched a full apparel collection in February, officials said.

"New styles are rolled out approximately every two to three weeks as a part of an ongoing launch schedule," Christy Sheets, Spartina's director of retail, said in an email.

The brand is also sold in more than 1,500 retail stores and boutique shops across the country and internationally and is mostly based on the resort-chic and coastal-chic feel, Maples said.

"This is the perfect market for Spartina 449," Sheets said in her email. "Our designs are coastal and chic, and both visitors and residents of the area will gravitate toward our products. We look forward to connecting to the local Wilmington community and also getting involved with local brand partners."

Just down the road from Lumina Station, a retailer and manufacturer of vinyl bags and accessories has leased space near Wrightsville Beach.

Holly Aiken Bags and Stitch is going into a space at 7232 Wrightsville Ave., inside a small retail center just before the Wrightsville Beach drawbridge.

Holly Aiken, the owner and designer, is moving her retail and manufacturing location to Wilmington from downtown Raleigh. The former location was a spot she held for 15 years, she said.

Aiken, who moved to the Wilmington area about five years ago, said she decided to relocate the shop closer to home. Holly Aiken Bags and Stitch has started the transition to Wilmington and opened up its new office space, she said.
“We wanted a place that was fun to come to work,” Aiken said of the shop's move to the area. “We love our new location, and the timing was right … it all just fell into place.”

Holly Aiken Bags and Stitch designs and manufactures all of its products and gives customers the option to go online to customize their own bags and accessories with various design options and colors.

"We are planning to open our shop in Wilmington beginning of April to mid-April," she added.

And a local artisan shop formerly located in downtown Wilmington has opened its doors in Mayfaire.

“It was a wonderful turnout. We had a great time. Everyone was amazed at how it all came together," said Michelle Conely, owner of Going Local NC. "It was two months of hard work building the space and getting it laid out and we were seriously impressed with the outcome.”

The group leased the 3,000-square-feet Mayfaire space after its former Front Street location in downtown Wilmington was damaged by Hurricane Florence. The storm damage to the downtown spot forced Conely to shut down.

The larger Mayfaire store in the location has given Conely the ability to have classroom space and host larger art pieces, she said.

The store has more than 100 artists with their works and products featured in the store, everything from handmade soaps and pottery to jewelry and clothing.

"It's a little bit of everything," Conely said, adding that there is also a country store selection of local food vendor artists.

"Various artists that want to teach a class in their medium will be offering the opportunity for the public to learn different art forms," Conely said.

Going Local NC plans to host the classes as often as possible, Conely said, adding “there should be something every week."

The 'Magic' begins Monday for new store on Oleander Drive