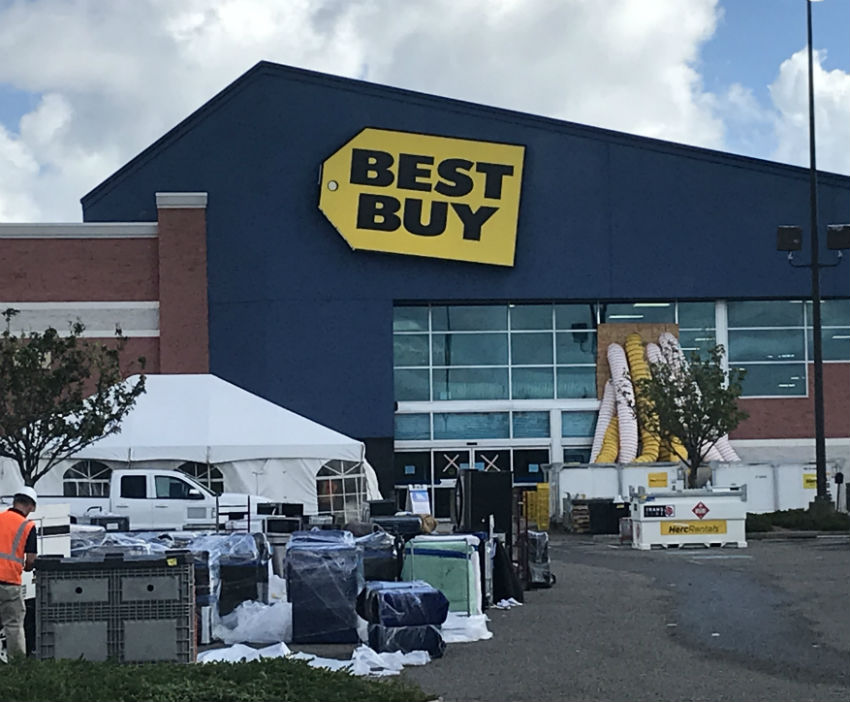 Crews work on the Best Buy store at 309 S. College Road in Wilmington on Monday. (Photo by Cece Nunn)
While many have been up and running again in the past few weeks, some retailers and businesses in the Wilmington area continue to feel the effects of Hurricane Florence four weeks later.

Among them is a national electronics retailer. Best Buy remains closed after its roof was damaged during the storm in September, causing significant water damage inside the store at 309 S. College Road.

"We are working to get the store reopen as soon as we can, but construction timelines can vary," said Best Buy spokeswoman Katie Huggins.

The store has 100 part-time and full-time employees who are being paid in full as they are assisting with disaster relief efforts in the community or working at other Best Buy stores, she said.

She said other Best Buy employees are donating their paid time off to affected colleagues in disaster areas through the company's Gift of Time program, and those employees who need it are also eligible for financial support from the Richard M. Schulze Family Foundation, established by Best Buy's founder, Dick Schulze.

In another example, a locally owned store, Modern Legend, is closed and expected to reopen next month.

"We had damage to our building, causing us to be closed for the next few weeks," said Catherine Hawksworth, owner of Modern Legend, in an email at the end of September.

Hawksworth's store sells vinyl records, clothing and home goods. While awaiting renovations to be complete at its 130 N. Front St. location in downtown Wilmington, Modern Legend has been working with other Wilmington businesses to continue selling the store's products through pop-ups around town, advertised via the store's Facebook page.

Also in downtown Wilmington, grocery store Farmin' on Front officials announced on Facebook on Monday that the 143 N. Front St. store is set to close temporarily because of last month's storm.

"Due to the effects of the storm and the subsequent aftermath, it has become necessary that Farmin’ on Front make immediate infrastructure improvements. For the safety of our staff and customers, Farmin’ on Front will pause its daily operations," the post stated. "Farmin’ will further use this time to implement and integrate other changes to better serve you, our customer. Updates regarding our progress and re-opening schedule will occur as new information is available."

Editor's note: This version has changed to reflect new information about the Blockade Runner Beach Resort.

At Mayfaire, store moves in to former bevello space