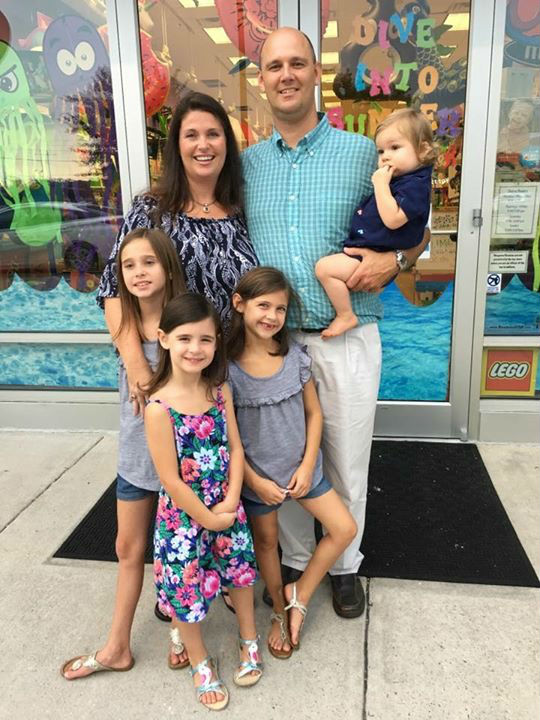 Angel and Mark Fair, shown with four of their five children, are the new owners of the Learning Express toy store in Wilmington. (Photo courtesy of Shelley Hobson)
When the Hobsons decided to move to a place where they could one day retire, they didn't know their plans would turn into a real-life toy story.

The former Massachusetts residents chose the Port City as their new home in 1995, opening a Learning Express toy store franchise that has steadily grown in customers and revenue over the past two decades.

This week, the Hobsons launched their retirement by handing over the reins of the store, at 3804 Oleander Drive, to new owners. Mark and Angel Fair bought the franchise for an undisclosed amount, Shelley Hobson said.

"This has always been part of the plan," Shelley Hobson said Friday. "We said to ourselves if we had an opportunity to move [from Massachusetts] to where we wanted to be when we retired, we'd do that. After looking at Beaufort, South Carolina, and Charleston, South Carolina, and then Wilmington, it was like the three bears - we decided Wilmington was just right."

The Hobsons came to Wilmington with their two sons, who are now 31 and 28. Twenty-two years later, the new owners of the Wilmington Learning Express have a similar story. The parents of five children ages 15 months to 19 years, the Fairs moved to Wilmington from Augusta, Georgia.

They discovered the Wilmington area when they were celebrating their ninth wedding anniversary two years ago. Having completed a sky dive together (Mark Fair is a skydiving instructor in addition to being a math teacher), the Fairs were looking for a beach town to continue the festivities when Wrightsville Beach came up in a Google search, said Angel Fair.

"As we got here, the sun was coming up and we absolutely loved it," she said. "I said, 'This is it. This is the place we should come.'"

After they moved here, Mark Fair said they were looking for a business to buy, an opportunity to make more money than a North Carolina teaching salary could provide, when he found out about the for sale listing for Learning Express.

"Both of us instantly knew that this was for us," he said. "When this one came up for sale, it felt like God was opening the doors and felt like this was the way we needed to go."

At one point, the Hobsons had two Learning Express stores in Wilmington, the one currently open on Oleander Drive next to Whole Foods and another on Military Cutoff Road they eventually decided to close.

"We had two stores when the recession hit, and we still did fine, but our growth slowed down at that point, and when we consolidated our stores . . . it was a lifestyle decision. We decided we wanted to simplify," Shelley Hobson said. "Our move next to Whole Foods [from Hanover Center] has been such a great move in terms of the space, the growth that we're seeing over there. The fact that we're next to Whole Foods and Carter's kind of made it a magnet and we decided it would be fine with just one store."

Hobson said some things that have set Learning Express apart from other retailers has been the ability for customers to buy presents and have them wrapped at the store, for kids to try out some of the toys they stock and the events held there.

"Shopping is entertainment. Birthdays are our bread and butter. People don’t think ahead really for birthdays; they come in on their way to the party. But I also know that people come into our store with their children and their grandchildren. We have a ton of grandparents who shop with us and when the grandkids come to visit that's one of the things on their agenda to do to entertain the kids is to bring them to the toy store," Shelley Hobson said. "You can’t do that online and you can’t do that It’s not as much fun to do in a big giant store."

The events often feature local personalities and children who can share their talents for things like making Rainbow Loom jewelry and one of the latest crazes among the kiddos, slime production.

"The reality about Learning Express stores is we are franchisees but we have a lot of freedom to run the business to suit our community and to suit the personalities of the owners and what they want to do. Our events are events that we create ourselves. Our product mix is not dictated by anybody except us, and we buy directly from the vendors versus having to go through a central warehouse so we're able to respond very quickly to trends and to things we think are going on in our market," Shelley Hobson said.

Mark Fair said the Fair family plans to stick with the winning formula the Hobsons have created. The Hobsons have been training the Fairs, and will be in the store until Aug. 11 and on call after that.

The store has about 15 employees.

"One of the great things about working here is watching customers grow up," said Ed Hobson, taking a break from ringing up customers on Friday. "One of the other great things is seeing the kids grow up and some of them end up coming to work for you."