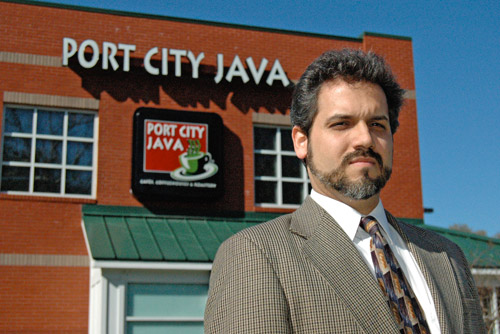 It will be business as usual - with a few new twists - as a civil lawsuit filed last year against Port City Java founder Don F. Reynolds Jr. and his wife Denise percolates in New Hanover County Superior Court.

Schnitzler joined the company in 1998 and became director of operations shortly afterward. During a recent interview at the company’s Market Street headquarters, he said he’s concentrating on regional expansion and ways “to exceed the customers’ expectations on every visit.”

Last week, Schnitzler announced an initiative to encourage franchise expansion in the Carolinas.

The “No Royalty” promotion stipulates that anyone who enters into a franchise agreement with Port City Java in 2009 will pay no royalties until 2010.

Schnitzler, 40, was named chief executive officer of Port City Java on Jan. 29. He comes to the job brimming with energy and ideas aimed at making the locally ubiquitous chain synonymous with quality coffee throughout the Carolinas.

Schnitzler has a message for loyal customers who have jump-started started their day with a Port City Java brew since the first cafe opened in 1995:

“We’ve been waking up Wilmington for the last 14 years regardless of what has gone on recently. I would like folks to know we’ll continue to do that. We’re here, we’re fine and we’re looking forward to the future.

“Focusing on what happened in the past doesn’t get us anywhere,” he said.

Former CEO Reynolds and his wife were abruptly dismissed from their positions within the privately held company on Dec. 23, shortly before a lawsuit was filed by Port City Java, Inc., that includes allegations of fraud, breach of contract and civil conspiracy. The allegations center on Reynolds’ handling of funds that plaintiffs maintain were intended for the use of Schnitzler and Port City Java.

The motions were withdrawn and no further court date was set. The possibility remains that an out-of-court settlement can be reached.

“We’re just going to proceed from there,” Schnitzler said. “We are very optimistic and actually very confident that going forward we are going to resolve everything fairly quickly.”

Randolph M. James, the Reynolds’ lawyer, said the motions scheduled to be heard were rendered moot by the filing of a second amended complaint by Port City Java lawyers. The complaint requires further review. “With any litigation there’s a level of gamesmanship,” James said.

The amended complaint contains “some broad strokes” lacking details about some of the allegations against Reynolds, James added.

Lawyers for both sides met privately for about four hours March 18 and engaged in “productive” talks, James said.

“There were serious discussions about trying to resolve the case for the benefit of the company and the brand,” he said. “There will always be hard feelings from both sides but business decisions can be made.”

As the case is pending, Schnitzler’s priority is shaping a strategic vision for Port City Java, while constantly improving what he describes as the “café experience.”

The new CEO is a graduate of the Culinary Institute of America and considers himself a hands-on manager. It’s a business philosophy Schnitzler brought to the coffeehouse business after years as a chef and executive chef in New York, New Jersey and Wilmington, where he and his family moved in 1994.

“I love working with my hands. I was always the one who got it done,” he said.

The concept of hospitality and a positive customer experience is key to Schnitzler.

“It has been my personal mission to make everyone within the company acutely aware of our actions and to realize how much the details matter,” Schnitzler said. “At Port City Java, we view everyone we meet as a potential guest.”

Schnitzler has implemented a training program for all Port City Java employees emphasizing those beliefs. He personally conducts the weekend training seminars.

“I think it’s absolutely vital that they hear directly from me that we exceed the customers’ expectations on every visit,” Schnitzler said. “We want to make everyone who comes in our stores feel welcome, relaxed and at home. We want them to feel it is their coffeehouse.”

Schnitzler said he was instrumental in creating many of the business protocols used at Port City Java, including the franchise model. In the current recession economy when new franchises in all business sectors are down, Schnitzler said he is using the lull period to improve the model.

One shift is to concentrate new franchising efforts in North and South Carolina. Port City Java owns 13 coffeehouses. Twenty-one others are franchised, two are licensed and there are two Port City Java international cafes. The company has operations in five states and three countries.

“Were going to narrow our focus as far as our growth. We really feel there’s a ton of opportunities focusing on the Carolinas and expanding just on what we already do,” he said.

Sixteen company and franchise locations are currently in operation just in the Wilmington area.

Through the “No Royalty” promotion, Schnitzler hopes to expand the scope of company operations throughout the Caro­linas, particularly in the Raleigh area.

The company is looking to expand to university and college locations. There are four successful Port City Java cafes currently operating on the North Carolina State University campus in Raleigh, with two more under construction.

“The university franchise model we have developed with North Carolina State University has been extremely successful,” Schnitzler said. “We have achieved solid brand recognition there. More than 40,000 students and faculty are already sold on the brand.”

“There are many multi-unit operators who have capitalized on their current concept and are now seeking to a new way to grow and offer opportunities to their own management team,” he said.

A “constant state of self analysis” is important for growth of the company, Schnitzler believes.

“I think our goal is to become the best regional chain of coffeehouses. We’re from the Carolinas and we’re going to focus on growth in the Carolinas for the next several years at least,” he said.

“There’s a tremendous amount of opportunity just in this area and we feel the best way going forward is to concentrate on that regional growth and not really to try to expand outside that area for now.”

Port City Java has about 165 local employees between its coffeehouses and roasting operation, Schnitzler said.

Schnitzler said the company is bearing up well to the nationwide recession. For the most part, he said, customers continue to make Port City Java part of their daily routine.

“The economy is, of course, affecting everybody and the great news for us is we haven’t seen a major impact in individual café sales. What we have seen is some folks going from a latte to a regular coffee,” Schnitzler said. “Port City Java is an affordable luxury and one of our goals is to become a part of our guests’ day. We like when folks leave our café that they refer to us as their café, not just a café. That’s a very important distinction.”

Schnitzler tells employees at his training seminars that a person can receive service from an ATM machine, but not hospitality.

“We absolutely focus on the hospitality aspect of what we do and I think that’s been instrumental in allowing us to weather the economy perhaps better than some others might be,” he said.

“Having said that, from the franchising side it certainly has an impact on how many individuals are seeking to open a brand new business right now, so we’re taking advantage of that down time to analyze everything we do within that franchise model to make sure that we are doing the best possible job” to offer “the best return on investment for potential franchisees that we possibly can.”

Schnitzler is also looking at possible additions to the Port City Java menu, which  includes a successful selection of breakfast wraps and sandwiches introduced last year. That could include new varieties of muffins or tortillas for sandwich wraps, he said.

But the bread and butter of the business will always be coffee. Schnitzler said he and others at Port City Java are sticklers for a high-quality product.

Each prepared at the company’s roastery on Market Street is
tested daily.

“The standards we have and the testing that goes on with the coffee is amazingly rigorous,” he said. “I want my coffee to taste the same every day. My first cup of coffee borders on a religious experience.”

Despite potential distractions generated by the lawsuit, Schnitzler remains enthusiastic about all aspects of ort city Java. to him, the job is anything but a grind.

"I love coming to work in the morning," he said.