Despite Slowdown, Sales Grew Downtown In '08 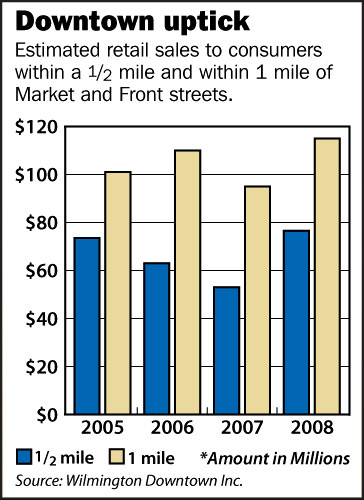 Downtown uptick Estimated retail sales to consumers within a 1/2 mile and within 1 mile of Market and Front streets.

Downtown businesses may have seen a drop-off in customers since late 2008, but as a whole, retail sales grew for the area’s hot spot, according to an industry report.

John Hinnant, executive director of Wilmington Downtown Inc., said the report was generated for his organization by ESRI, a company that analyzes data. Statistics were collected for retail trade and food and drink establishments.

“We saw a $23.3 million increase in retail sales for calendar year 2008 over calendar year 2007,” Hinnant said. Forty-seven new businesses opened, 23 of which were retail trade and 24 for food and drink, he added, citing business license information from the city of Wilmington.

Hinnant said that 2007 was not downtown’s strongest year in recent memory. In 2006, retail sales totaled $62.7 million for 150 businesses in that half-mile radius, and for 2005, the figure was $73.4 million for 184 businesses. Last year’s retail sales, however, topped the last four years.

With a higher number of businesses in the mix for 2008, that meant the retail sales were divided among more businesses, he said.  “As the pie grew, so did the number of slices.”

“I’m still seeing interest in people wanting to be downtown,” he added, referring to prospective tenants. He attributed this to “the amenities and foot traffic” downtown offers, along with rents that are lower than in some shopping centers.

Hinnant said that downtown likely saw more tourists in 2008 because more rainy days brought people off the beach to downtown. Also, it marked the first year that PPD was at full occupancy at its headquarters.