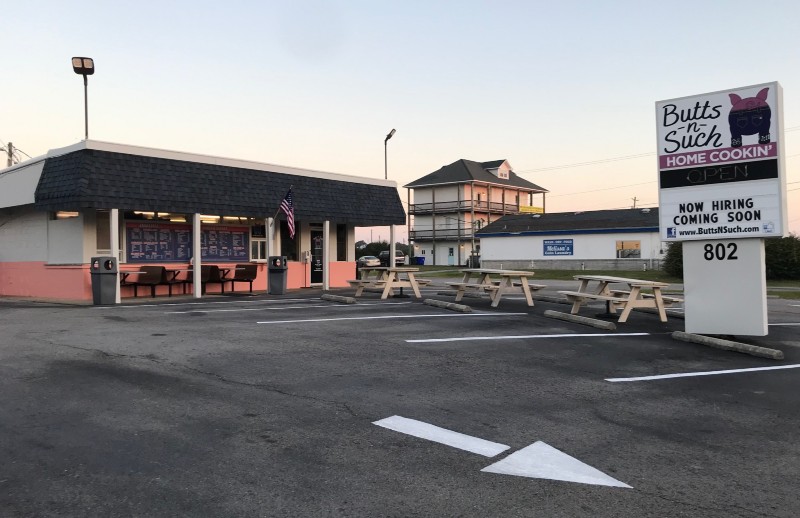 Tammi and John Sharp and Helen Starling have opened Butts-n-Such at 802 S. Lake Park Blvd. in Carolina Beach, with a grand opening planned for Saturday. (Photo by Cece Nunn)
A barbecue restaurant that also serves chicken, seafood and more opened this week in Carolina Beach.

The new restaurant is open from 7 a.m. to 9 p.m. Tuesday through Sunday, said Tammi Sharp, who owns Butts-n-Such with her husband, John, and Helen Starling, who worked for A&G for 15 years.

When the owners of A&G decided to retire, “the opportunity just presented itself for us to lease the building, and so we went with it,” Tammi Sharp said.

The Sharps have been business owners for 30 years, running Quality Landscape Systems based in Rock Hill, South Carolina.

With Butts-n-Such, the owners strive to offer home cooking in a family friendly atmosphere. They’re do things differently from A&G.

“We've changed a lot of stuff. The barbecue is not the same. We actually offer one that's not seasoned because a lot of people don't like vinegar-based, so we do one that doesn't have any seasoning on it,” Tammi Sharp explained. “And we offer some different types of barbecue sauces that they can kind of put on themselves.”

“We've decided to do breakfast from 7 to 11 and then lunch and dinner from 11 to 9 every day of the week, except for of course Monday when we're closed. So that's kind of a new thing for everybody,  and a lot of people are really excited about the breakfast,” Tammi Sharp said.

As for hiring efforts, the owners of Butts-n-Such brought some A&G workers over to their restaurant, in addition to hiring new employees.