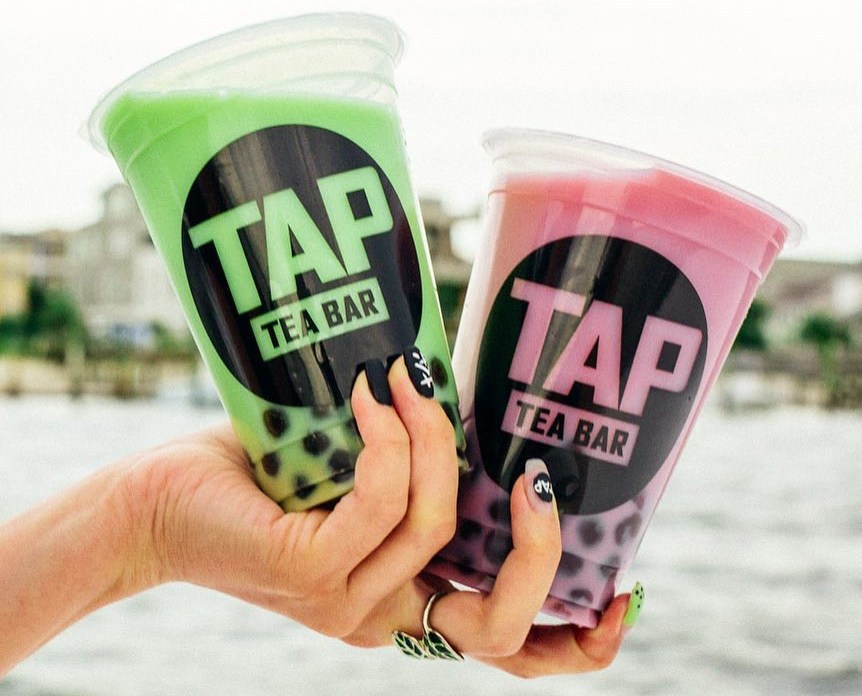 Le said he’s received many requests for a second location in all parts of town, but ultimately chose The Pointe at Barclay because of the continued residential and commercial growth in that area. The new location occupies the space previously held by I Love Juice Bar.

The tea bar has cafe seating for about 20 people, as well as outside tables and chairs. The menu, which has a few recent additions, will be the same at both locations. New items include Tiger Drizzle, a brown sugar syrup designed to enhance other flavors, and Slush Teas – teas with an icy or slushy consistency.

The majority of Tap Tea’s offerings are vegan and dairy-free, although some do come with milk products such as locally sourced vanilla ice cream.

Dynh said the Racine Drive location of Tap Tea remained open for curbside service when the pandemic started last year, but many days were very slow, and profits were often far below normal.

“We managed to find new routes to make the best of the situation and eventually we had lines out the door once again,” Le said.

In addition to quickly implementing curbside service, Le credits a strong social media presence with keeping Tap Tea in touch with its customers. Le said keeping customers up to date and engaged was critical.

Once he was able to reopen the bar to customers, he was thrilled to see it blossom into a gathering space for many – especially teenagers.

“It’s a fun and safe place for kids of that age group to spend time together,” Le said. “It’s been really great to see them hanging out and trying new drinks.”

And while some things have returned to normal, Le said he is still dealing with supply shortages – something he anticipates will be an issue for some time.

“It’s something different from week to week,” Le said. “But we’re committed to using only the top-quality ingredients.”

Le said that four years ago, most customers were not familiar with boba tea, a Taiwanese drink containing a tea base mixed with fruit or milk, to which chewy tapioca balls (known as bubbles, pearls or boba) and toppings are added. Now, while unfamiliar customers do still make up a percentage of guests, the majority are repeat customers or have some familiarity with the drink.

Le said the main driver behind his desire to open Tap Tea was the fact that he couldn’t find it locally. It was a childhood treat he had such fond memories of and wanted to share it with the community.

“Boba tea reminds me of family and good times,” Le said. “It’s something very special to me, very positive. I tell my employees to be happy when making drinks to spread happiness because their attitude is reflected in the final product.”

Customers will find order sheets at both locations where they can select from milk tea (hot tea), refresher (iced tea), frost tea (blended with ice cream) or slush tea (blended with ice). Next, customers select black, green, decaf or oolong tea. Le said for those who don’t normally like tea, the addition of other flavors will mask the tea if that’s their desire.

“It won’t taste like tea unless you want it to,” Le said.

The next step is to select the toppings. The traditional topping is tapioca, but other popular toppings include jellies and fruit poppers.

Current hours at both locations are 10 a.m. to 9 p.m. daily. The hours at The Pointe at Barclay may extend on weekends for evening moviegoers.

Tap Tea Bar is located in Unit 9 at Racine Commons, 250 Racine Drive, and 1407 Barclay Pointe Blvd., Unit 405, at The Pointe.  Both locations include a small gift shop and free Wi-Fi.