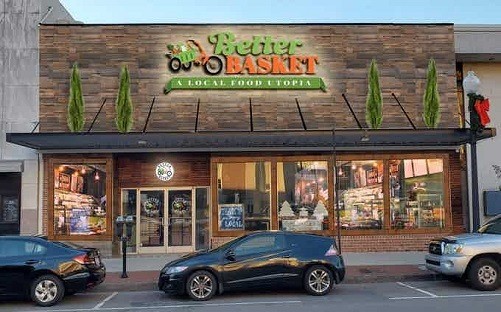 Farmin’ on Front opened in late 2016 and was the vision of Wayne Long, co-founder of Well Care Health and Farmin' Brands. Allen and Meares have subleased the space from the Long family and hope to expand upon the Farmin' on Front vision

Better Basket aims to work directly with local farmers to bring in fresh produce daily. In addition to fresh produce, Better Basket is expected to have a bakery with breads and confections, a self-serve salad bar, and a wide variety of prepared meals.

Better Basket had launched a Kickstarter campaign previously to help inform the community about the store's goals and allow contributors to be a part of Better Basket’s Founders Program. The campaign was cut short, however, when Allen and Meares received negative feedback about the crowdfunding approach.

Meares said the campaign led people to think that the money for the project was not there, which he said is not the case.

“We felt it was best for the business to end the Kickstarter campaign,” Meares said. “But we still have opportunities for investors to take part in our Founders Program.”

Meares said the design phase of Better Basket is currently underway, despite several delays in financing and permitting. Meares said a June opening may still be possible; however it’s not likely that every aspect of the store will be in place at the time of opening.

“There are lots of boxes to check in terms of the build-out as we move toward securing the necessities for the June time frame,” Meares said. “The creation of a terrace area in the back and a few other things may have to come at a later date.”