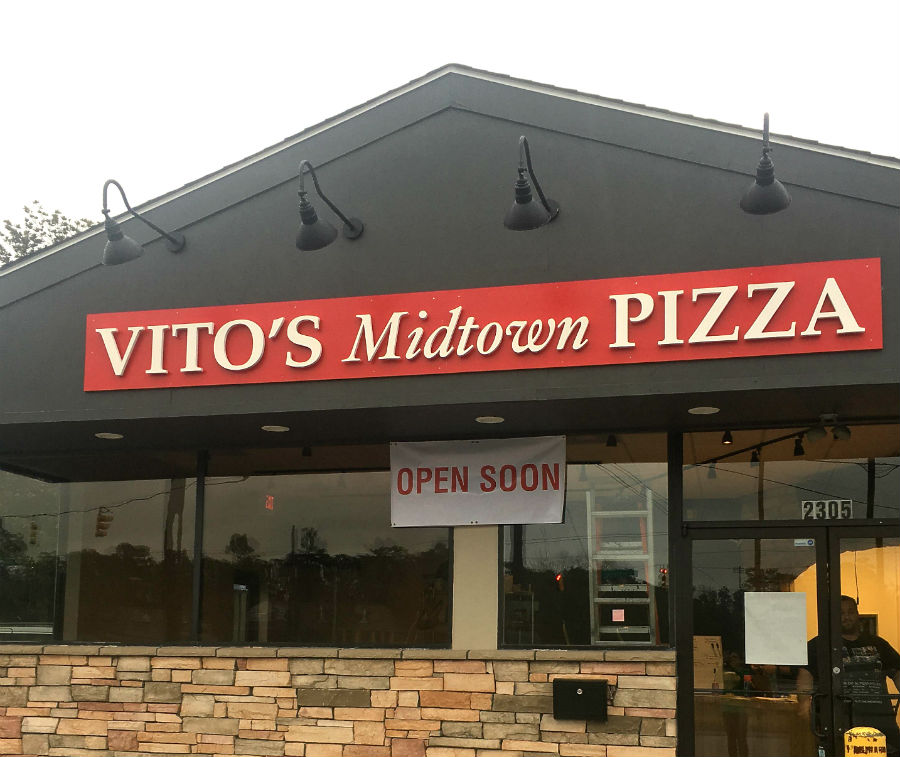 Vito's Midtown Pizza is scheduled to open in the spot formerly occupied by Marco's Pizza on South College Road. (Photo by Jessica Maurer)
Vito’s Pizza owners Cat, Keith and Drake Norris, along with general manager Alex Wilcox, will soon be opening a midtown location at the corner of South College Road and Long Leaf Hills Drive, across from Shipyard Boulevard.

In addition to operating Vito’s at Wrightsville Beach since 2006, the Norrises own C-Street Mexican Grill in the Long Leaf Shopping Center.

Keith Norris said he really wasn’t in the market for another restaurant, but once  Marco’s Pizza vacated the building at 2305 S. College Road, he couldn’t stop thinking about a possible second location for Vito’s each time he drove past.

“It’s a great spot for pickup and delivery, and I knew we could do another Vito’s there,” Keith Norris said. “And my brother Drake, who really is at the heart of our food operations, said he had the energy to take it on so we decided to go for it.”

The space is zoned for pick-up and delivery only, so that will be the business model for now. The Norrises are installing a point of sale (POS) system that is integrated with GPS to help coordinate deliveries as effectively as possible. As for the delivery zone, it will be limited to start, allowing owners to assess the new system before expanding the coverage area.

A new Italian-made, gas-fired stone pizza oven has been installed and the Norrises have made some tweaks to their dough recipe in order to achieve the right texture for their NY-style pies, since the oven at the beach location is an older, electric model.

“We’ve done a ton of experimentation,” Keith Norris said, “and we’ve moved to an American-made flour without any preservatives so we can create a healthier, all-natural product.”

Norris said the larger kitchen at the new location will allow them to expand the menu to include a wider variety of pies and toppings. Due to space restrictions and high volume, Vito’s at the beach is limited as to how many types of pies they can produce during peak times. The midtown location will also eventually offer salads and desserts.