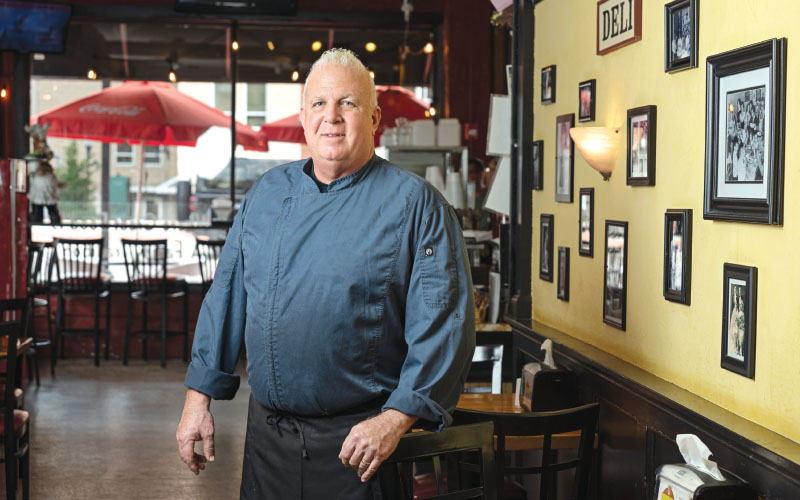 Joe DeLiberto, one of the owners along with his wife,Debby DeLiberto, of Cousins Italian Deli, said the eatery’s family-style feasts provide an experience to remember. (Photo by Michael Cline Spencer)
The fondest memories are made when gathered around the kitchen table.

This idea is the foundation upon which the owners of Cousins Italian Deli, Joe and Debby DeLiberto, built their business. It’s even stenciled on the wall of the deli, surrounded by family photos.

The DeLibertos both hail from large Sicilian families and grew up sharing weekly meals with relatives in New Jersey. Joe said one of his most heartfelt memories is waking up Sunday mornings to the smell of his father’s sauce filling the house.

“Growing up in a Sicilian family, you show up every Sunday at your grandparents’ to eat,” Joe said. “It’s a standing invitation for the entire family.”

Joe and his cousin Ritchie opened Cousins Gourmet Deli in Patterson, New Jersey, in 1986, when Joe was just 23 years old. The deli served breakfast and lunch and had a thriving catering business.

But after 17 years, Joe was burned out. He knew it was time for a change of pace and scenery. While it was difficult for he and Debby to leave their close-knit family, they decided to move to Wilmington with their two daughters, Debby’s mom, and some close family friends.

Joe switched things up by operating flooring and landscaping businesses for a time, but Debby knew he was longing to get back to the kitchen.

The couple began casually scoping out possible locations for a new deli and were downtown one evening when they saw a “For Rent” sign in the window of 7 N. Third St. They called right then and there to set up an appointment to see the space, and before long it was theirs.

“It was surreal because the deli we had in Patterson was a neighborhood deli where local police and lawyers from the courthouse were regulars,” Debby said. “It was a very similar feel here at this location. We looked at each other and we knew this was right for us.”

The couple decided to stick with the name Cousins, because they had such good luck with it the first time around and they wanted to continue to draw upon the fact that it was a family-run business, serving family recipes.

While the deli in New Jersey had done a steady lunch business, the DeLibertos soon realized that commuters in Wilmington were much more likely to grab their coffee and breakfast from a drive-thru on their way downtown. And while they decided to continue to offer breakfast sandwiches throughout the day, they began brainstorming ideas for how to expand the business beyond the lunch crowd.

“We wanted to create an evening experience that would feel like you were dining at our home,” Debby said. “But we didn’t have the kitchen capacity for a full-scale dinner service.”

“And we knew we couldn’t have an a la carte menu just two nights a week,” Joe added.

Hence the idea for weekend family- style dinners was born, and the DeLibertos say it has redefined their business.

“The very first dinner we did, I came out at the end to introduce myself, and the dining room filled with applause,” Joe said. “It was so humbling and it brought tears to my eyes.”

Each weekend Joe prepares the family-style feast featuring recipes that he grew up with but has put his own touch on over the years, including stuffed mushrooms, arancini (stuffed rice balls) and eggplant rollatini. But some of the recipes, like his father’s sauce and grandmother’s biscotti and carrot cake, have remained as is.

“I get to talk about my grandmother every week when people say how much they love the carrot cake,” Joe said.

The DeLibertos believe that it’s not just about the food, but the entire experience, from ambiance to customer service. It’s about evoking and sharing memories, and helping to create new ones. Dinners at Cousins are often celebratory in nature, whether honoring an important milestone or just enjoying time with friends and family.

“People tell us all the time, ‘This is just like dinner at my Nana’s,’” Debby said. “And I think that authenticity is something that people have really connected with. There’s nothing that gets to people’s hearts like food, and you can see the enjoyment on people’s faces.”

Cousins offers a 6 p.m. seating on Friday, and reserves the 8:15 p.m. timeslot for private parties. In an effort to accommodate theatergoers, they recently adjusted their Saturday evening times to 5 p.m. and 7:15, allowing the pre-theater crowd to dine at 5 p.m. and still have plenty of time to arrive at a 7:30 show.

Customers of Cousins will be excited to learn that after years of requests to purchase their house dressing, the DeLibertos are now in the process of working with a North Carolina bottling facility to bottle the dressing for retail sales. “My Cousin Joey’s White Balsamic” is expected to be available at the deli this spring.

But when it comes to requests from customers to consider opening additional locations in areas like Porters Neck and Southport, Joe said he’s a one-stop shop.

“I’m not a guy that’s going to have multiple locations,” Joe said. “I’d rather be sold out every weekend than open another location and take away from what we have here.”