Outpost Continues To Take Shape With Opening Of Beer Garden 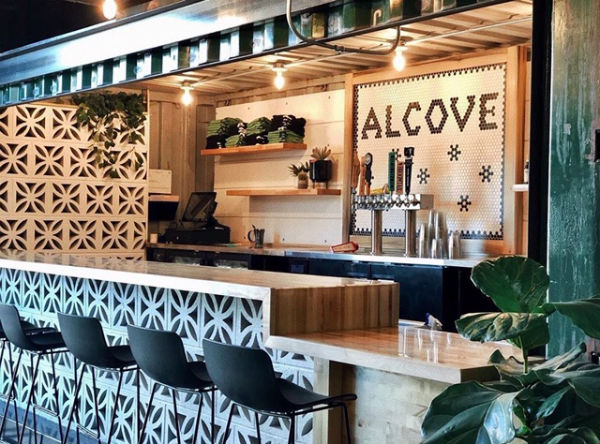 Alcove Beer Garden, the newest addition to the Outpost at the Cargo District, officially opened Feb. 2. (Photo courtesy of Alcove)

Alcove Beer Garden, the newest addition to the Outpost at the Cargo District, officially opened Feb. 2.

Alcove owner Billy Batten, who also operates Growlers Tavern on Front Street, said Alcove is a simple concept serving beer and wine and providing a space for people to gather for work, meetings or relaxation.

Batten said he is excited about adding another layer to the Outpost, which also houses his brother Chris Batten’s coffee shop, Bespoke Outpost.

The Outpost is a gathering space designed as both a communal workspace and a social gathering spot with indoor and outdoor seating. It offers a variety of unique nooks and crannies to hang out in, as well as a podcast studio and a patio that will be completed by the end of the month.

The Battens said there are also plans for a burger restaurant that will be made public shortly, pending final permits.

Alcove’s bar offers eight taps featuring a rotating selection of local craft beer. Beer is also available by the can and bottle, with a focus on regional beers as well as a selection of more widely known brews from larger breweries such as Sierra Nevada and a couple of domestic light beers.

“We want everyone to be able to come in and feel comfortable ordering something they like, rather than be intimidated by a bunch of beers they’re not familiar with,” Billy Batten said.

Alcove’s bar seats ten, and there are several beer garden-style tables and wicker swings nearby. Patrons are welcome to take their beverages to any of the gathering spaces throughout the building, which offers seating for about 60-70 people in all.

Once the restaurant plans have come together the Batten’s said a grand opening celebration for the Outpost will be planned – stay tuned for details.

Alcove Beer Garden is open from 1 p.m. to 8 p.m. Monday through Thursday, and noon to 10 p.m. Friday through Sunday, with hours to extend later this Spring.