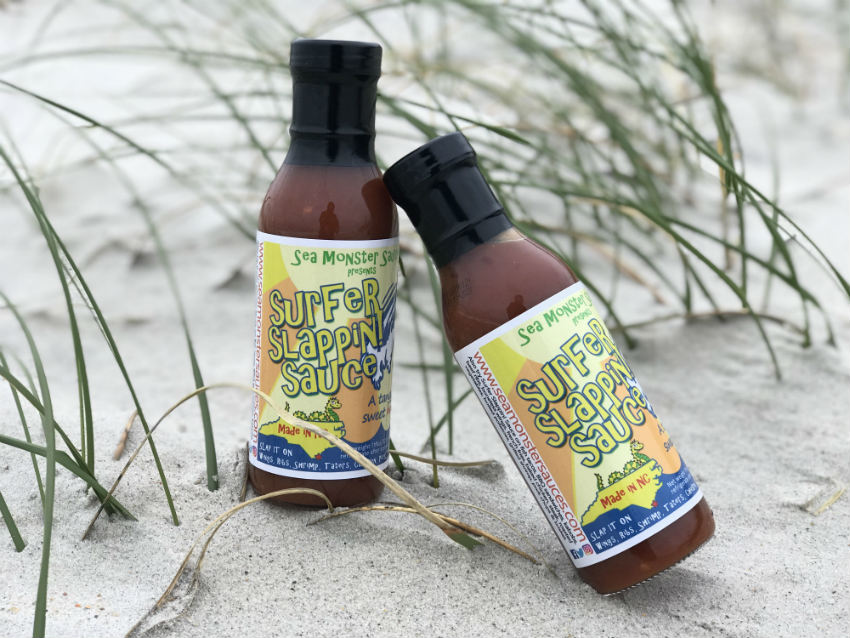 The pair said that Sea Monster Sauces is now selling its signature Surfer Slappin! Sauce in over a dozen locations in the greater Wilmington area, including Tidal Creek Co-op, Seaview Crab Company, Taste the Olive & Vine and Go Sauce Yourself on the boardwalk in Carolina Beach.

O’Rourke created the sweet and tangy Surfer Slappin! Sauce over 30 years ago, and his son Ryan O’Rourke recently began incorporating it into several items on his menu at The Dive in Carolina Beach. Ryan O'Rourke co-owns The Dive with his wife, Laura.

Mack said O’Rourke’s Surfer Slappin! recipe was a family favorite for many years before the idea to bottle it came about.

“It’s a homegrown recipe that’s made its way to a bottle,” Mack said.

Sea Monster Sauces has also partnered with several area food trucks such as 2 Bros Coastal Cuisine and Poor Piggy’s to allow the public to sample the sauce alongside some of their menu items.

The recipe contains just eight ingredients including red pepper and Tabasco for a kick, and has changed very little over the years, according to Mack.

“It’s a very versatile sauce,” Mack said. “It’s great on everything from wings to ribs to grilled shrimp and vegetables.”

Mack and O’Rourke are working with Good Hops Brewing in Carolina Beach on their second release, a hop-infused honey mustard IPA sauce, which is still in development.

Owners say they hope to expand their wholesale distribution to restaurants throughout the area, and eventually work their way into the wholesale and retail markets of Raleigh, Fayetteville and Myrtle Beach.

Mack said Sea Monster Sauces is proud to be a part of the small business community, and has donated dozens of bottles of sauce to local fire stations and police departments.

They plan to take part in several area festivals and farmer’s markets beginning this spring, and will take part in the Step Up For Soldiers Backyard BBQ Cook-off on March 7 at the Battleship North Carolina.