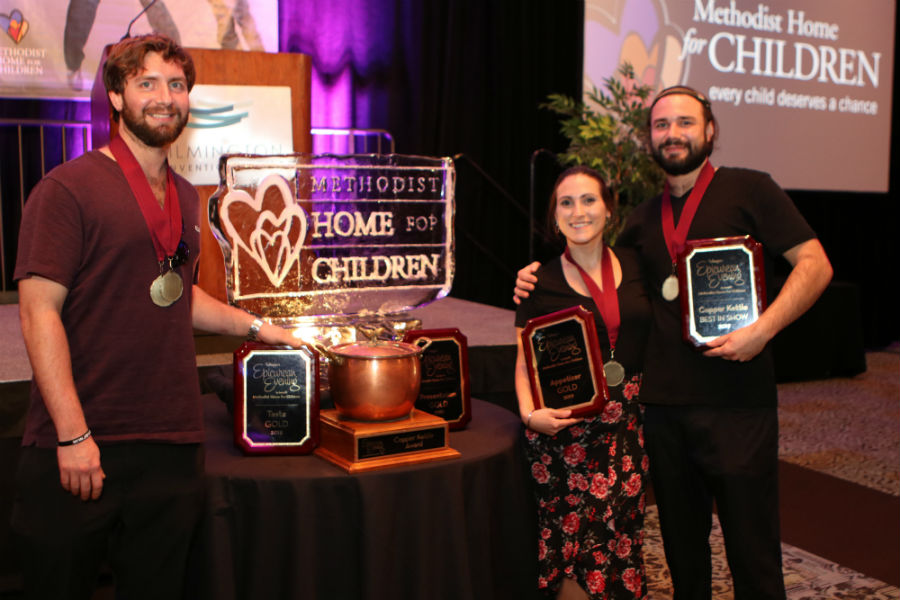 “We are so happy to have held this event in advance of the approaching storm after the event was cancelled due to Florence in 2018,” said Regina Hawse, development officer and event director.

Sixteen local chefs along with 12 brewers, vintners and mixologists served up appetizers, entrees and desserts and beverages while competing for awards such as best in show, epicurean’s choice, people’s choice, best taste and best presentation.

Sam Cahoon, chef and owner of Savorez, took the evening’s top prize, the Copper Kettle award for best in show, for his tuna tostadas. The dish is composed of yuzu-sirachi-soy marinated tuna breaded in sesame seeds, seared, and thinly sliced. It's layered on top of a mini-corn tostada with fresh avocado, pineapple salsa, pickled shallots, jalapeno, yuzu aioli, cilantro and Savorez’s "unstoppable caviar.” Cahoon said the caviar is not true caviar, but a gelatinization of the tuna marinade.

“This was our first time participating, and I've always wanted a shot at getting the Copper Kettle,” Cahoon said. “We were scheduled to participate last year, but unfortunately Hurricane Florence put a stop to that.

"It was really wonderful getting to work with all the other chefs and businesses involved in the event. Got to see some old friends, as well as meet some new faces. And knowing that this event was to benefit such an important cause only made it that much better.”

Cahoon said he is pleased to report that Savorez has enjoyed a very busy 2019.

“We’ve been slammed all year just doing what we do,” Cahoon said.

The people’s choice award went to chef James Melvin of 22 North while the best entree award was given to Elijah’s Restaurant and the best dessert award went to Nothing Bunt Cakes.