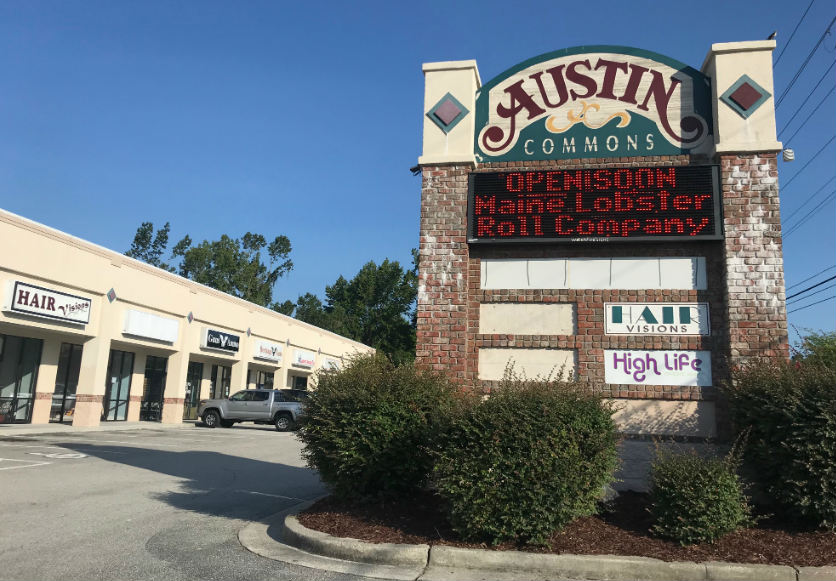 The Maine Lobster Roll Co. is planned for a unit at the Austin Commons shopping center on Carolina Beach Road. (Photo by Cece Nunn)

"It’s going to be just a straight Maine lobster roll, nothing fancy,” said Bill Irwin. “My family’s from Maine. We’ve been down here about seven years now, and every

place I go, when I mention I’m from Maine, people say, ‘Oh, the lobster rolls!’”

Bill Irwin said the business is not like a traditional restaurant and won't have a changing menu.

“It’s going to be just lobster rolls and maybe a clam chowder or something like that for the side. There will be four, five or six different types of just basic lobster rolls."

The Irwins have lined up a lobster distributor in Maine, and the rolls will be New England-style hot dog rolls, which are flat on the sides and open at the top, Bill Irwin said.

“I just think Wilmington's ready for it,” he said. “We're hoping to fill that little niche market.”

The Irwins also plan to offer a carbonated beverage called Moxie, which was designated the official soda of Maine in 2005.

A main feature of The Maine Lobster Roll Co., Bill Irwin said, will be simplicity.

“Sometimes simpler is better,” he said. "Plain and simple is the whole idea of the thing."

He said a website for the lobster roll business, which is expected to open in the next couple of months, is in the works.

Waffles + Whiskey to open at The Hive