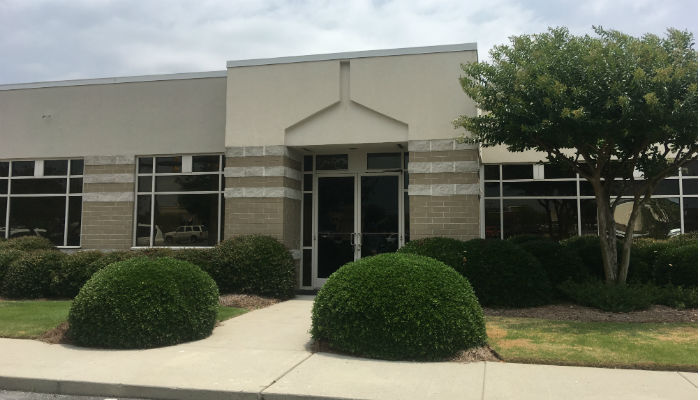 Chicken Salad Chick, a restaurant chain, will be opening at 1131-A Military Cutoff Road, the former location of Wells Fargo Mortgage. (Photo by Johanna Cano)
Chicken Salad Chick, an Alabama-based restaurant chain, will open its first Wilmington location at the entrance to The Forum in the previous location of Wells Fargo Home Mortgage, according to a news release.

The restaurant will be at 1131-A Military Cutoff Road, next to Swain & Associates and Sound Bank.

The local franchise owners, Shane and Haley Pinder, plan to open it in the fall after the location is converted from an office space to a restaurant one.

“When Wells Fargo’s lease expired, we realized we had a unique opportunity,” said David Swain, Swain & Associates developer, in the release. “When I originally developed this building in the mid-1990s, the highest and best use was for office. However, things have changed significantly since then. The space is situated at the signalized entrance to The Forum and is well suited for retail space. Chicken Salad Chick realized this as well, and we are pleased to announce we are bringing them to the market.”

Jason Swain, a developer with Swain & Associates, said the company looks for tenants that officials are excited to have in the property and brands that blend well with what is offered at The Forum.

“Wilmington is developing so rapidly that there are opportunities now, where in the past, the best use may have been something different,” he said.

Leasing an office location to house a restaurant is not something Swain & Associates has previously done, Jason Swain said.

“We have repurposed spaces plenty of times, but this is the first time that we have taken an existing office location and converted it to retail,” he said.

Menu items range from traditional versions of chicken salad to more creative savory, fruity and nutty and spicy takes, according to the company’s website.

The Pinders decided to open a location in Wilmington after visiting the area several times and falling in love with it, Haley Pinder said.

“It was easy to see that this location at the entrance to The Forum would be perfect for our first restaurant,” she said in the release. “We are excited to introduce to Wilmington the delicious homemade chicken salad flavors, gourmet soups and signature sandwiches that have made Chicken Salad Chick famous all over the country.”

The Pinders moved to Wilmington from Virginia last year with the goal of opening their first restaurant, she said.

To be adapted into a restaurant, the interior is being demolished and will be fitted with the required kitchen and plumbing infrastructure, Haley Pinder said. A patio area will be added to the space.

"There will be a designated space folks can rent for parties and private meetings," she said.

There are 100 Chicken Salad Chick restaurants in the U.S., including two in Charlotte, and one in Greensboro and Asheville.

The restaurant will fit in well with the coastal and health-conscious market in Wilmington, Haley Pinder said.

"Everything is made fresh every day," Haley said. "The menu is conducive to low-fat diets or ketogenic diets. There is something for everyone."