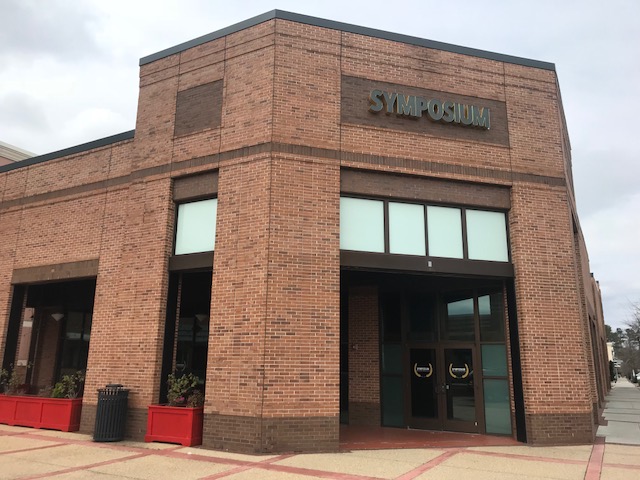 The space has seen its fair share of turnover in the last several years. The Circa Group operated two restaurants in the space, Happy Days Diner from 2011-2012, and Towne Tap & Grille, from March 2012 to August 2015.

Yanni Papanikolaou, George’s son, said that his family plans to relocate the restaurant, but was unable to confirm a new location at this time.

“I hope to be able to reveal more in the next couple of days,” Yanni Papanikolaou said. “We had a great relationship with the staff at Mayfaire, but it was no longer a viable location.”

The family, which also operates The Greeks at 5120 S. College Road in Monkey Junction, opened Symposium last February. After just six months in business, the restaurant was closed for over three weeks following Hurricane Florence.

“Like many area businesses, Hurricane Florence had an impact on us,” Papanikolaou said.

In response to customer feedback, owners reworked Symposium’s original concept and name last December, focusing on increased variety and approachability, as well as an increased number of traditional Greek dishes.

Meanwhile, in a post on Symposium's Facebook page dated Feb. 4, officials said, "We are really excited today to announce an additional new restaurant location for The Greeks. The Greeks Greek Grill will open in the following months, at the corner of Oleander and College Road. This new location for The Greeks will focus on the familiar fast casual fare, with some surprises and additions that you all have been asking us for! . . . Stay tuned for more details!! We are projecting to open there mid/late Spring 2019!"

Cece Nunn contributed to this story.