The Liquid Room Rebrands And Reopens As Varnish Ale & Spirits 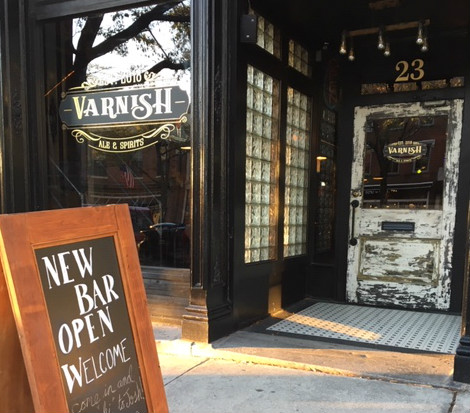 To kick off their 10th year of ownership, Shawn Booth, Lee Hauser and Nathan Mitchell closed the doors to The Liquid Room on Jan 2 for rebranding and renovations.

"While we made updates over the years since taking over the bar in 2009, the time had come to make it our own," Shawn Booth said.

And part of making it their own meant not only a new look, but also a new name: Varnish Ale & Spirits. The name fits the historical context of the building that housed the largest paint and varnish depot in North Carolina, M.W. Divine and Company. The original building was destroyed in a fire in 1830, but was rebuilt in 1840.

In 1901, M. W. Divine and Company was awarded the contract to paint the exterior woodwork on the courthouse in downtown Wilmington.

"We really wanted to use a name that would bring the building back to its roots," Booth said. "This brings everything full circle."

As for renovations, Booth, Hauser and Mitchell have replaced the high top tables opposite the bar with five new booths, creating more intimate, comfortable gathering spaces. A new bar has been installed, as well as new lighting, fans and a large window facing Market St. The mix of dark wood and exposed brick creates a rustic, relaxed atmosphere.

“The window brings natural light, as well as a view of the street,” Booth said. “Before no one could see into the bar, but now people can see in from the street, making it more inviting.”

The bar is now serving several new signature cocktails as well as daily drink specials. There are 24 beers on tap, 16 of which are dedicated to locally brewed beers.

The landing at the rear of the bar houses a pool table and television, and the upper level, which is open from 11 p.m. to 2 a.m. on Friday and Saturday, features a dance floor and two bars, and a DJ.

“We reopened our doors this past Saturday afternoon, and remained at capacity throughout the night,” Booth said. “The reception so far has been fantastic.”