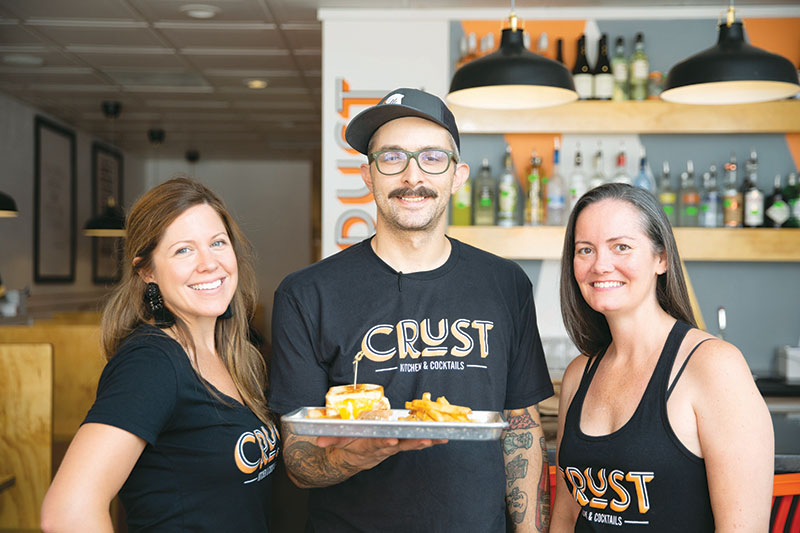 In larger cities across the globe, single-item restaurants have been trending for several years. Because the menu is centered around one concept, the idea is that it’s got to be the best around, the kind of dish that will keep people coming back for more. Some restaurants are taking popular food truck-style street eats and ethnic specialties to brick-andmortar locations, while others bank on luring customers by creating a feeling of nostalgia, serving items like meatballs, fried chicken or grilled cheese sandwiches.

At Crust, the nostalgia goes beyond just recreating an American classic. The décor, music and even the names of the sandwiches riff off of 1990s pop culture, the decade when owners Emily Luther and Stacey McPherson were coming of age.

Di Giorgi, McPherson’s husband, is classically trained and worked in fine dining for many years. He said he longed to have a restaurant of his own where he could have fun with the menu.

“I grew tired of preparing entrees with two sides and a sauce,” he said. “I wanted something that wasn’t so stuffy and something that people could really get excited about. Plus grilled cheese is a childhood comfort food that everyone can relate to.”

Di Giorgi said his original menu had 16 sandwiches but following the restaurant’s soft opening, he quickly trimmed that back to nine, eight specialty grilled cheeses and one traditional – the Home Alone – prepared with muenster, cheddar, Swiss and brie.

“Our kitchen is small and with 16 sandwiches, it was just too much prep for the space,” Di Giorgi said. “Plus it was too much product. I realized we needed to really hone in on doing fewer sandwiches and doing them really well.”

As a first-time restaurant owner, Di Giorgi said having a narrow focus allows him to perfect his dishes and keep his food costs in check. He uses the same bread for all of the sandwiches and will change his menu seasonally, running daily specials to incorporate some of the initial menu items and keep things interesting.

“What’s great is that I can still draw upon my background to incorporate complex flavors into our sandwiches,” Di Giorgi said. “Even though the focus is narrow, you have to keep people coming back for more.”

Nakedfin Poke Bowl owners Alyssa and Ritchie Hart have created a restaurant focused on an East Coast version the Hawaiian specialty poke, a raw fish salad prepared with chopped fish and a variety of accompaniments. It is traditionally prepared in advance and sold by the pound, but at Nakedfin, poke bowls are made fresh to order. “This method of preparation is better suited to our area,” Alyssa Hart said. “People want things that are fresh and that they can customize.” Nakedfin customers can create their own bowls by selecting a base of rice, mixed greens with kale or taro chips, followed by a protein – raw tuna or salmon, cooked shrimp or tofu – followed by a sauce, a variety of fresh mixed vegetables and toppers such as sesame seeds, seaweed salad, avocado and fresh fish roe. In addition to the create-yourown option, Nakedfin also offers several signature bowls.

“When we first opened, we found that people were gravitating toward the signature bowls because they weren’t exactly sure what to put together,” Alyssa Hart said. “But after a while, we saw our repeat customers begin to create their own bowls and have a lot of fun with customizing them.”

Alyssa Hart said that about 70 percent of Nakedfin’s business at this point is from repeat customers.

“It really is something that you crave once you start eating it,” she said. “And while many people order the same bowls once they’ve found one they really love, with a little convincing they will try something new. Just by changing one of the sauces you will get a whole new dish.”

Among single-item restaurants, many are designed as fast-casual, with counter service such as at Nakedfin, or primarily for takeout, as with Rollz, the downtown eatery offering sweet and savory egg rolls.

Owners Kasey Lawrence and William Allred liked the space at 110 S. Front St., formerly occupied by the Wayfarer Deli and then Promised Land Kitchen, but were concerned about the small kitchen and limited seating.

The egg roll concept came about one night as the couple was brainstorming menu ideas as Allred prepared a late-night snack.

“It started with him making a Philly cheesesteak egg roll,” Lawrence said. “And for a while, every night he would create a new filling.”

The egg rolls could easily be prepared in a small kitchen and are the type of carry-out food that can be eaten on the go at any time. The rolls themselves are nods to classic comfort foods such as bacon mac and cheese, pepperoni pizza, loaded baked potatoes and Reuben and Philly cheesesteak sandwiches.

Rollz also serves sweet rolls, such as cheesecake with a raspberry.

These restaurant owners are banking on their ability to take one dish, serve it a variety of ways, and keep customers coming back for more. What might be next on the list of singe-menu restaurants in the Port City? The answer may be as simple as pie.

How to help support local restaurants

Schools serve meals to thousands of children across N.C.