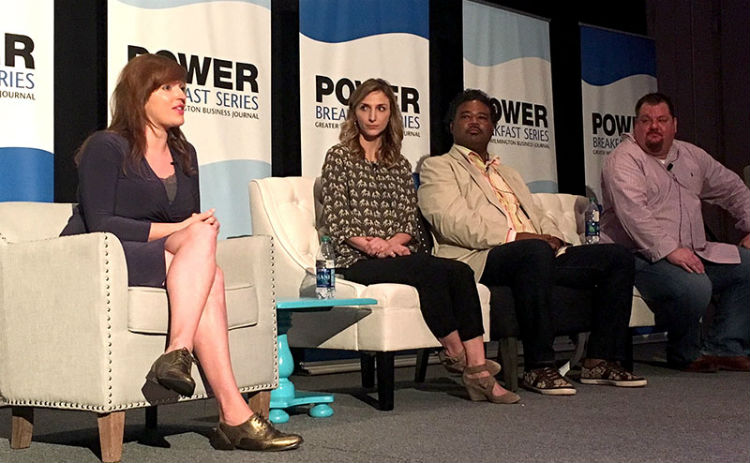 Moderator and Greater Wilmington Business Journal Publisher Rob Kaiser asked the panel at the Wilmington Convention Center what they look for in developing restaurant concepts for the area.

Jensen said that for she and Durley, it was about filling a niche in the market. She said that after visiting coastal towns throughout the southeast, they honed in on opening a restaurant in downtown Wilmington, but needed to solidify their concept.

Amber Moshakos said it all begins with a dream. First you have a dream of what a restaurant can be, and then you have to look at the personality of the community and ask, “What can that dream bring to that community?”

In terms of how dining habits have changed in recent years, Ray Worrell pointed out the fact that if a customer walked into a restaurant 20 years ago looking for vegan menu options, most Wilmington restaurants might not have even known what "vegan" meant.

“Even a vegetarian would be looked at like they had three eyes and three feet,” Worrell said. “But that isn’t the case anymore.”

The demand for vegan, vegetarian, and gluten-free items has risen so dramatically that restaurant owners have expanded their menu options to accommodate dietary needs. Worrell said he spent a year searching for a gluten-free pizza crust that he felt comfortable serving.

“Dietary restrictions can be a challenge for the industry as well as the diner,” Smith said.

In addition to changing dietary needs, customers are also more concerned with where restaurants are sourcing their ingredients. And with the rise of food culture and celebrity chef culture, customer expectations have risen dramatically.

“People have expanded their pallets, what they're impressed by, and what they want to post on their social media,” Jensen said. “They're expecting a little more sophistication.”

The rise of social media is another area that has had a huge impact on restaurants. While it allows for each customer to provide positive free advertising for restaurants, it is also a platform for negative reviews.

Rhodes, a Wilmington native, pointed out that Wimingtonians has more than 1,000 options when it comes to dining out, a huge increase from when he was growing up.

Moshakos said she believes there are now more restaurants in Wilmington than consumers to support them, and that only those that are invested in the community will experience long-term success.

“If you look at it on a bigger scale, there's just so many more restaurants than consumers,” Moshakos said. “The people who are taking care of their guests, being responsible and responding to the changing times, those are the people who are going to bubble to the surface in this next evolution of the restaurant industry.”

One of the biggest issues facing restaurants today, according to panelists, is a staffing crisis. The ability to find and keep reliable, hard-working employees continues to plague restaurant owners. This is particularly difficult, they say, in an industry where many view employment in restaurants as temporary.

“No matter what your goals for the future are, the restaurant industry teaches a lot of great skills,” Moshakos said. “Teamwork, customer relations, and how to take care of others. No matter whether you're going to become a lawyer, a doctor, or a schoolteacher, those are great skills that are incredibly transferrable.”

Owners said it’s often challenging to instill as sense of pride and ownership in employees who don’t plan on a career in the restaurant industry, but feel strongly that when an employee feels valued and successful, their attitude and productivity will soar.

An audience member questioned the panel on the issue of restaurants that have experimented with eliminating tipping. Panelists were quick to say that tipping incentivizes good service and servers rely on tips for the bulk of their wages.

“It’s important that everyone be able to make a living,” Keith Rhodes said. “The public needs to be aware that some servers still only make minimum wage and they depend upon appropriate tips. If you can’t tip appropriately, you shouldn’t go out to eat.”

“If tips go away, labor costs rise and that has to be covered somewhere,” Smith said. “Will it be that you buy cheaper food or raise menu prices? Either way, the restaurant suffers.”

At the end of the day, panelists agreed that success is built upon providing incredible experiences.

“It’s really important to make personal connections with customers, put on a show, impress guests, and make lasting impressions,” Rhodes said. “It’s all part of solidifying a great dining experience so they will want to come and see us time and time again.”