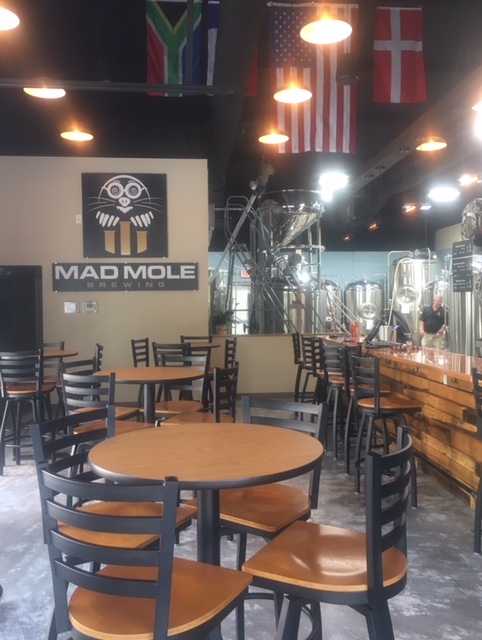 With just a year from inception to completion, Mad Mole Brewing has opened the doors to its taproom at 309 Boathouse Road.

The brewery is owned and operated by Martin de Jongh, Ole Pederson, Chris Worden, Thomas Varnum and Neil Blake. A team effort, many of the recipes were developed by de Jongh and Pederson, who have been avid home brewers for the better part of the last decade. Blake, who studied chemistry and fermentation at Appalachian State University and interned at a number of Asheville breweries, will serve as head brewer.

The name Mad Mole comes from combining the “m” from Martin’s first name with Ole’s name. Adding "mad" to "mole" is a nod to their “mad scientist” approach to brewing and every beer name is a play on the word mole. Even the custom designed bar top depicts moles at work and play.

The brewery’s seven-barrel electric system, which is powered in part by solar panels, also features temperature controlled stainless steel beer storage tanks, which are linked directly to the taps rather than the beer being stored in kegs. The entire brewing system is visible from the spacious taproom, which features a large glass garage-style door that opens onto a sail-covered patio with true German “beirgarten” tables and benches.

“We spent a lot of time talking with other local brewers who were willing to share their best practices with us and have received so much support from the local brewing community,” de Jongh said.

“It’s all about making good beer and it’s really satisfying to see that we’re already starting to have repeat customers,” de Jongh said. “The response so far has been really positive.”