First-grade students at Cape Fear Academy visited Beach Bagels Oleander Drive location Tuesday as part of a quest to clean up area beaches and spread the mission of the Plastic Ocean Project.

The Plastic Ocean Project’s locally based Ocean Friendly Establishments (OFE) initiative, an effort to reduce plastic pollution, recognizes local restaurants that have agreed to serve plastic straws to customers only upon request.

Ginger Taylor, founder of Wrightsville Beach Keep It Clean, is credited with spearheading the initiative that began two years ago with a handful of restaurants, and has grown to include over 70 establishments in the Cape Fear Region and along the Crystal Coast.

Gretchen Scoutelas, Carrie Casson and Angie Jackson, first-grade teachers at Cape Fear Academy, felt that connecting students with the Ocean Friendly Establishments initiative as part their research on ocean pollution would help educate students on the dangers of pollution as well as empower them to make changes in their community.

When students realized that some of their favorite restaurants were not on the list of Ocean Friendly Establishments, they wrote letters to several, including Beach Bagels, asking them to consider becoming an OFE.

Beach Bagels owner Tony Di Norcia admits he was hesitant at first, mostly due to concerns that customers requesting straws might interrupt the flow of service during the upcoming summer season. But at the same time, he felt compelled to give it a shot, and Earth Day seemed as good a time as any to test the waters. 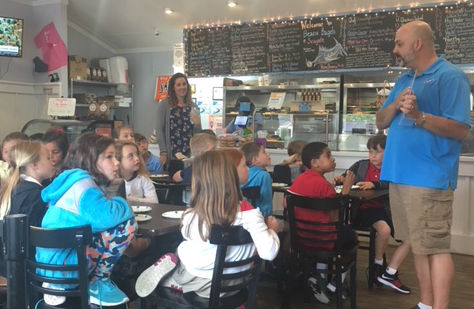 Di Norcia posted information about “skipping the straw” for Earth Day on Beach Bagel’s social media accounts, and the response was overwhelmingly positive, as was the feedback he received from managers and customers at both locations. So for now he has agreed to continue with skipping the straw for the entire summer, and if all goes well, he will stick with the program for good.

“We have been recycling for a while now and looking for additional ways to make the environment more a part of our core values,” Di Norcia said. “After all, 'beach' is part of our name and we want the brand to stand for environmental consciousness.”

In addition to only serving plastic straws upon request, Di Norcia has ordered re-usable stainless steel straws that he will sell for around $2.25, and is researching options for more eco-friendly disposables.

Di Norcia invited the students to visit his restaurant, where they snacked on bagels and discussed how their research and outreach has helped to create change in their community.

“We want our students to know that even a 6-year-old can change the world, one small step at a time,” Scoutelas said. “Citizens throughout our community are looking for ways to create change and this is a great example of how sharing knowledge and requesting action can bring about change.”