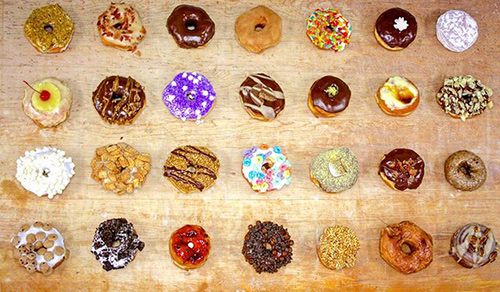 Owner Danny Tangredi said that he was contacted by the show last spring, and after submitting an application, the Wake N’ Bake crew were flown to Toronto to film the show last July.

Tangredi said he and his staff were required to sign a contract forbidding them from discussing their involvement in the show until the episode’s airdate was announced. Even then, they could only announce their participation, not the results.

In a battle entitled, "Wake Up Call," Wake N’ Bake faced off against two other teams in the first round, which featured coffee as the mystery ingredient. They secured a spot in round two with a whipped espresso filled cake doughnut topped with a bourbon stout reduction glaze and chocolate bark.

With one team down, Wake N’ Bake battled through the next round, during which they were required to prepare two bagel-inspired doughnuts.

Tangredi said his team created an everything yeast doughnut that served as the top and bottom of a bacon, egg and cheese sandwich as well as a maple cream cheese glazed doughnut with candied walnuts and a blueberry compote.

“We loved competing and this was a great experience, especially since it worked out in our favor,” Tangredi said. “And the fact that people would be hearing about Wilmington and Carolina Beach is very exciting.”


Have a tip for Restaurant Roundup? Email us at: [email protected].