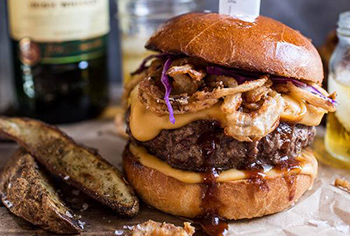 Halligan’s Public House owners BT Corrigan and Randall Willard have signed a lease for a 4,000-square-foot space in The Pointe at Barclay, a 300-acre multi-use development now under construction at 17th Street and Independence Avenue.

Corrigan said the concept for Tavern on 17th will be a cozy, upscale tavern with a large bar area that is separate from the dining room. He says it will be family friendly and able to accommodate large parties.

The menu will include pastas, steaks and seafood for dinner; sandwiches, burgers, flatbreads and salads for lunch. Corrigan said he and Willard are also considering offering breakfast Thursday through Sunday.

“Tavern on 17th will be a slightly more refined concept than what we have at Halligan's,” Corrigan said. “We will take some of the best of what we’ve done there and incorporate it into a new take on an upscale tavern.”

Corrigan plans to have 30 beers on tap, with an emphasis on local and regional craft brews.

Hill Rogers of Cameron Management represented both the client and the development in the lease agreement. Tavern on 17th will be next door to the complex’s movie theater.

“We are certainly excited to welcome Tavern on 17th to our tenant roster at The Point,” Rogers said. “It will be a very inviting and fun place to dine and socialize.”

Construction is set to begin this fall, with an early 2017 opening anticipated.