It's All Sweets And Smiles For Gigi's Cupcakes 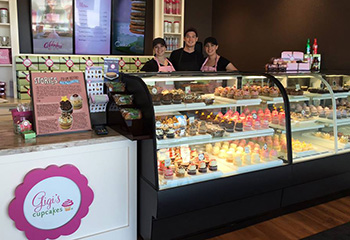 Marina Lee, owner of Gigi’s Cupcakes in the University Centre shopping center, describes cupcakes as a happy product, a product that brings a smile every time.

After nearly 20 years in operations with Cisco, much of it spent working abroad, Lee and husband, Maury Cole, were ready to settle stateside and take on a new challenge. Lee felt a franchise would provide her with the best recipe for success and when she had a chance encounter with Gigi’s Cupcakes founder, Gigi Butler, she immediately fell in love with her and her vision for the company.

Lee and Cole opened their first location in Briar Creek, near Raleigh, in 2011. They were No. 3 in sales nationally after their first year, and by the end of the second year they were No. 1. Just last fall they opened a kiosk at The Streets of Southpoint Mall in Durham.

“This has been a tremendously fun journey,” Lee said. “And we’re thrilled to be open now in Wilmington.”

Lee said she had many requests to deliver cupcakes to weddings all along the coast of southeastern North Carolina from her Briar Creek location.

“Sometimes people were practically paying more for delivery than for the cupcakes, which was crazy,” she said.

Now, having a store in Wilmington will allow Lee and Cole to serve many more destinations along the coast.

“Connecting with the community is such a big part of what we do, and it’s so wonderful to be a part of making special memories for our customers,”  Lee said.

Lee, who is a Make-A-Wish Champion, donated the profits from Saturday’s soft opening to Make-A-Wish of Eastern North Carolina.