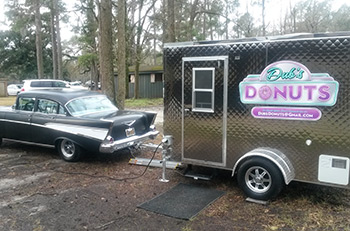 (Photo courtesy of Dub's Donuts)
For the past five years, Doug and Whitney Johns, owners of P.T.'s Olde Fashioned Grille Food Truck, have heard one thing over and over again: ”So what do you have that’s sweet?”

While Whitney Johns would make occasional desserts for the truck, the Johnses began to think that maybe there was niche to be filled.

Hence the creation of Dub’s Donuts, which Doug Johns describes as a doughnut trailer serving fresh coffee and a rotating selection of breakfast sweets. It’s a quilted stainless steel trailer that looks like on old-fashioned diner, pulled by a 1957 Chevrolet.

Dub’s serves creative doughnuts such as s’mores, chocolate caramel toffee crunch and vanilla chai tea. The couple uses all organic ingredients, zero-trans-fat canola oil for frying and no shortening in their recipes. Doug Johns says that using heart- healthy oils cuts the calories in about half. All of the glazes and frostings are made from scratch and the organic, free-trade coffee is brewed with spring water.

“We want to put out a product that shows we love the people we’re serving,” Doug Johns said. “We’ve really grown with a lot of families over the past five years and we want to be sure that everything we’re putting out is on point.”

In addition to doughnuts, Dub’s offers waffles and individual funnel cakes -- smaller than those typically found at street fairs -- in flavors such as gingerbread and red velvet. Just like the doughnuts, the flavors change daily.

Dub’s can be found at the Cape Fear Community College North Campus on Monday mornings and at PPD on Wednesday and Friday. Doug Johns says he is continuing to work on adding additional locations. Private bookings are always available.

“My wife Whitney and I really want to extend a heartfelt thank you to the community for the outpouring of support for both the trucks. We are so humbled and grateful,” he said.