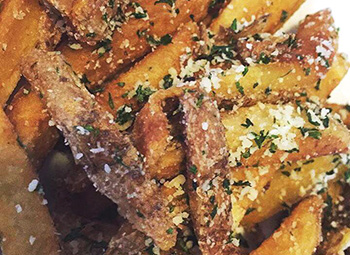 (Photo courtesy of NeMa Eatery and Lounge)
Thalian Hall officials announced the winners of last week’s A Taste of the Town event. The "Taste" is a fundraiser for the performing arts center and features a competition among 15 downtown restaurants, all vying for the prizes of Best Appetizer, Best Entrée and Best Overall.

This year’s attendees awarded the Best Appetizer to first-time participant NeMa Eatery and Lounge for its fancy fries. The fresh-cut fries are tossed with parmesan, truffle salt and herbs.

“Thank you to everyone who came out for A Taste of the Town and for giving us your vote for Best Appetizer,” said NeMa owners Mark Borkowski and Neil Lovaas. “We’ve only been open for three months, so what an incredible honor.”

Best Entrée was awarded to Cousins Italian Deli for a double bite that included penne Bolognese and chicken Marsala. Cousins won the Best Overall award last year and tied with Caprice Bistro for Best Overall in 2013.

“We’re so happy that Wilmington has accepted us and proud to work on this event with Thallian Hall to showcase all that downtown has to offer,” said Cousins' owner Joe DeLiberto.

The Best Overall award was given to The George on the Riverwalk. Chef Larry Fuller served samples of three of the restaurant's most popular dishes: shrimp and grits with blue crab, a crab and corn chowder and grilled pork chops with apples over mashed sweet potatoes.

The management team at The George posted this remark to its Facebook page in response to taking home a Taste of the Town award for the first time: “We are honored to be involved year after year with such a great organization like Thalian Hall. We are grateful for the chance to showcase some of our signature menu items and band together with other local businesses in support of such an important community asset. Thanks again for allowing us to participate! We'll see you again next year!”

“This year’s A Taste of the Town was an amazing event,” Thalian Hall spokesman Gary Tucker said. “All of our restaurants put out great offerings and the patrons raved about how wonderful the experience was. We would like to thank all of our participating restaurants and we look forward to another wonderful event next year.”