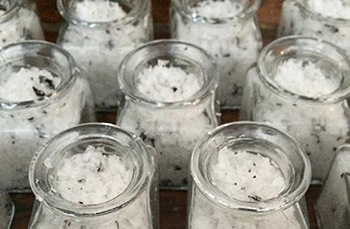 Their first orders came just a year and a half ago. Now to satisfy customer demand, the Jacobses have purchased a 4.5-acre farm in Burgaw to expand their capacity for salt making.

The Jacobses gather water from Wrightsville Beach and solar evaporate it in salt houses to create pure sea salt. The process, which can take up to three weeks, results in a flaky salt with intense flavor and great texture, according to Amanda Jacobs.

The new farm provides the space necessary for expansion. In addition to selling locally at three farmers markets, Sea Love salts are sold to several area restaurants and gourmet shops as well online.

Amanda Jacobs says that the current facility just doesn’t allow them to meet the needs of customers. In fact, she’s recently had to skip out on some of the markets due to lack of supply.

The Jacobses launched a Kickstarter campaign in early July with the goal of raising $15,000 to cover the cost of building new salt houses and a drying room as well as the purchase of solar panels. The goal was reached last week, a full two days ahead of the 33-day campaign closure.

“We are super excited to have so much support from friends, customers and complete strangers,” Amanda Jacobs said. “When people say it takes an army to start a business, it is the truth.”

One of the things Amanda Jacobs said she is most excited about is seeing how local chefs incorporate her salts into their menus. She said the cocktail salt, which contains lemon, lime and orange zest and was originally designed as a glass topper for cocktails, is popular with chefs at local seafood purveyors such as Catch and Ceviche.

Pembroke’s Restaurant and Rx Restaurant and Bar purchase the pure sea salt and often smoke it themselves while Flytrap Brewing uses it in one of their German-style beers. Sea Love salts can also be found on the menu at Surf House, manna, PinPoint and Bento Box.

The Jacobses have taken on two University of North Carolina Wilmington business students as interns to help with marketing and customer relations this fall, and Amanda has tasked David with finding a new tank for their truck that will help them transport larger amounts of water more efficiently. The Jacobses hope to complete renovations by mid-October.