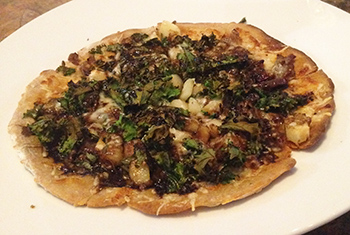 NeMa Lounge and Eatery owners Neal Lovaas and Mark Borkowski -- NeMa being a play on their first names -- bring a passion for clean, hand-crafted food and drink to their new downtown restaurant in Chandler's Wharf, 225 S. Water St.

Borkowski takes the lead in the from-scratch, open kitchen while Lovaas selects small-batch wine and beer designed to complement Borkowski’s dishes and manages the front of the house.

Borkowski, who trained at Le Cordon Bleu in Sydney, Australia, makes all of the restaurant's sauces, dressings and soups as well as homemade pizza dough, tortillas and pita bread.

“Everything here is scratch-made,” Borkowski said. “We go to great lengths to use clean, preservative-free ingredients of the highest quality.”

There are a number of vegetarian, vegan and gluten-free options on the menu, and Borkowski admits he can be a bit obsessive about the food he cooks as well as how it’s prepared. NeMa uses only grass-fed beef and antibiotic-free chicken, and rice bran oil for frying. The restaurant is also nut free.

“We’re not striving to be a health food restaurant,” Borkowski said. “But we are striving to serve clean food.”

NeMa has an open kitchen, visible from two sides. Visitors to the shops at Chandler’s Wharf are likely to observe kitchen staff rolling out pasta for ravioli or preparing hand-cut French fries that are twice fried and tossed with Parmesan cheese, truffle salt and herbs.

Borkowski and Lovaas are continuing to refine the menu and will eventually offer weekend brunch and late-night menus. Lovaas is also working to book acoustic musicians to perform.