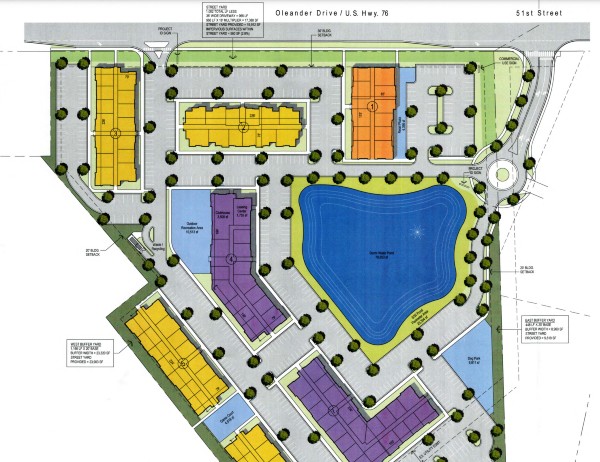 A site plan shows apartment buildings and a stormwater pond proposed at 5026 Oleander Drive. (Site plan courtesy of the city of Wilmington)
River Place developer East West Partners wants to take a swing at turning a former golf driving range in Wilmington into apartments, according to site plans.

The proposal would require a rezoning, according to the plans, to a designation that allows a multifamily project.

East West's rezoning application to the city stated that the project would include 5% affordable housing at 60% of the area median income (AMI).

The application also stated, "Wilmington will be the urban center of Southeastern NC as our area continues to experience historic growth. Regardless of where they live within the tricounty area, people will continue to come into the City of Wilmington to work, shop and gather. Whether or not they have to drive 5 miles or 25 miles to their destination will in no small part determine the future built environment of our city. To that end, 5026 Oleander Drive is a site that is centrally located within the city at a time when we need to be mindful of how and where to house more people."

The site plans by Norris & Tunstall Consulting Engineers also show a stormwater pond, a 3,500-square-foot clubhouse, a 10,500-square-foot outdoor recreation area, a nearly 4,400-square-foot retail plaza next to the ground-floor commercial space, a dog park and a game court.

In 2016, a proposal to build a student housing project on the property never came to fruition after it faced opposition and was withdrawn. The Capstone Collegiate Communities development would have included 38 duplexes and townhomes.

East West Partners worked in a public-private partnership with the city of Wilmington on the nearly completed River Place, a 13-story mixed-use development in downtown Wilmington.

Before the pandemic began, the city also chose East West's $90 million proposal to transform downtown's northern gateway as the one to move forward with.

Efforts to reach an East West Partners representative Wednesday morning for more information on the 5026 Oleander Drive proposal were not immediately successful.